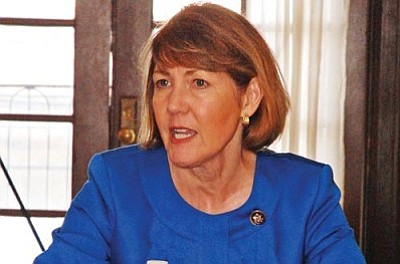 WASHINGTON, D.C. - U.S. Rep. Ann Kirkpatrick (D-Ariz.) urged a House Natural Resources subcommittee to act quickly on her legislation to designate the Red Rock lands around Sedona as a National Scenic Area in a landmark hearing on that bill held Thursday morning.

She and Sedona Mayor Rob Adams pointed to the bill's potential to grow the tourism industry and bring new jobs to the area while protecting a unique Arizona treasure in testimony before the Subcommittee on National Parks, Forests and Public Lands.

The hearing is a milestone for a legislative effort that the Congresswoman has been working on since before her term began. It is the first time the House of Representatives held an official discussion of the designation and what it will mean for the Sedona area. Sedona Councilwoman Barbara Litrell was also in attendance, but not every speaker supported the designation.

Click "play" to hear Recordings of Kirkpatrick's statements to the subcommittee.

"Preserving the natural beauty of the Red Rocks will ensure that our great-grandchildren will be able to enjoy this unique site just like we do. It will also attract new visitors and more business to the surrounding communities, getting folks to work during this economic downturn," Kirkpatrick said in her statement to the subcommittee.

"Sedona's core industry and economic generator is tourism," Adams said in his statement for the record. "The city welcomes approximately 3 million visitors per year who generate thousands of jobs, millions in revenue for the city and state and hundreds of millions in local business activity."

All this would come without requiring significant investment of taxpayer dollars, as a sort of low-cost job creation effort, according to Kirkpatrick's office.

The congresswoman has worked with Mayor Adams, the Sedona City Council and a variety of other interested groups and organizations to develop a bill that meets the needs of a range of stakeholders. The U.S. Forest Service, the Sedona Chamber of Commerce, the Sedona-Red Rock Scenic Area Coalition, the Sedona-Verde Valley Association of Realtors, the Roman Catholic Diocese of Phoenix, small business owners and concerned citizens all provided valuable comments and edits to the text of the measure.

She continues to talk with these folks and to look for ways to improve the bill as the legislative process moves forward.

The Council support, however, came only after a recent city election swept out dissenting council members. Prior to the election, the council majority opposed the NSA concept.

Joel Holtrop from the U.S. Forest Service, also testified in support of the NSA.

Click "play" to hear Recordings of Adams' statements to the subcommittee.

But, support for the H.R. 4823 was not universal. Holly Mabery, who also addressed the Subcommittee hearing, as a past-president of the Sedona-Verde Valley Board of Realtors, said the history of NSAs around the country has not been practical and flexible to change.

"The creation of the National Scenic Area designation places an additional unnecessary layer of control over an area that has already been shown to have good stewardship. The last two land exchanges that took place prior to Amendment 12 being put in place were voted on by the people of the area. These two exchanges resulted in Sedona Red Rock High School and the Sedona Cultural Park. Sedona would be the only municipality in the nation whose boundary is within a National Scenic Area. Given the track record of other NSA's throughout the country, the unintended consequences may be lengthy. We have mistrust of replacing what has been working with a designation that has shown to be problematic in other areas of the country including the infringement upon private property rights," Mabery said.

Kirkpatrick will next be working to build on the momentum of the hearing and earn support for the legislation among committee members and the full House.