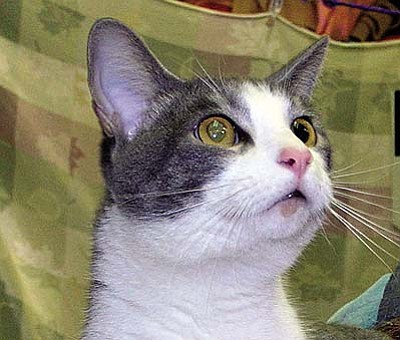 The Verde Valley Humane Society Pet of the Week is Kelli. She is a beautiful, affectionate adult female cat who has been with us too long! The spay portion of Kelli&#8217;s adoption fee has been discounted by $20 thanks to the generous donors of the Verde Valley. At this time due to our over population all animals over one year in age have $20 discounted from their adoption fee also. This special pricing will last until June 26.

Many of you have visited us over the past few weeks and have seen that we are filled to the brim with puppies and kittens.

We also have a large selection of adult dogs and cats that have been with us for months. These wonderful animals have waited patiently for their new homes.

In other words, there are a lot of new furry friends already living with their new families but there are just as many still waiting for homes.

A new pet can have many challenges no matter what age they are. There are ways to handle most situations without giving up your new pet.

Do you have a new puppy or a newly adopted adult dog in your home that is causing a little bit of grief in the household?

Are you being faced with the destruction of items in the home or maybe too many “accidents” being done by your new “best friend?”

One of the most effective methods that has been said to correct behavior issues is to crate train the animal.

Many of you know that I got married back in April. Getting married meant my husband Al and I merged our two families together.

I have five children and Al has four. That means we have even more than the Brady Bunch, doesn’t it? I believe we have enough kids for some type of sports team.

Not only did we merge our two legged children, but also our four legged children. I already had my two dogs, Hope (our shelter dog) and Honey. Al had a dog named Benji.

Thankfully our children are living out on their own, but our little house is crowded with our four legged kids.

This brings challenges at times. There are two females and one male each trying to show exactly who the boss is in the household.

As they contend Benji proves to the girls that he’s the boss. He can lift his leg and trickle on the blinds, the girls can’t. Thank you so much Benji!

None of furry friends are real problems; they just each have their own little antics which sometimes cause a little friction in the house.

The topic of today’s Pet Corner is fresh in my mind because my husband and I have just decided to crate our terrier mix, Benji.

He’s not a problem child by any means; he and his sister just like to get into a minuscule bit of trouble with their older sister while we sleep at night.

While Al and I slept we never knew what the kids were doing. The little rascals pretended that they were asleep before we even dozed off.

Often we found little accidents bright and early in the morning. It looked like they had a grand time as we slept soundly.

Other times there were chewies ground into our leather couch plus many other little things that you don’t want to wake up to.

Crate training was a touchy topic at our house when I first brought it up. Al had never really understood crate training so he had visions of Benji screaming and yelping and thrashing his body around violently when placed in his crate for the first time.

All I could think was please Benji don’t do what dad is expecting, just go in like Hope and make everyone happy.

Thankfully Al watched Benji walk into his new crate without any argument at all. He and his sister Hope rested in their crates side by side very quietly for the night.

Sometimes I wonder if our Golden Retriever, Honey thinks she has been left out because she isn’t crated. She just sleeps quietly next to her brother and sister.

At our house what helped create harmony was two crated canine friends and one to roam freely. We all sleep soundly these days.

Some people agree with crate training and some people refuse to even consider it. Read on; remember it’s about the animals not us.

The decision is up to you and it’s all about what works at your house. It’s not a mandatory rule that everyone has to abide by. It’s merely something worth trying when nothing else seems to work.

When used correctly, the purpose of the crate is to provide a secure short term confinement area for safety, housebreaking and the protection of household goods.

It is said that veterinarians and profession dog handlers have accepted, trusted and routinely used dog crates since their inception.

For many pet owners, the first reaction is “It’s like living in jail, it’s cruel. I’d never put my dog in a cage.” At times there is no other choice when negative behavior becomes an issue.

Using a crate can help eliminate the stress that owners feel when a pet displays undesirable behavior. It can be a win-win solution for all concerned.

Wouldn’t you have a much better time while you were out if you didn’t have to worry about what your pet was doing next?

Your best friend will also feel much better when he doesn’t receive the much dreaded scolding that usually happens when you arrive home.

Just remember, not many parents would even consider raising a child without a playpen or crib to sleep in. Animals, just like children need our guidance and protection.

As responsible adults, we need to take the necessary steps to keep them safe and free from danger. Not too much to ask from us, is it?

Dogs are known to have a den instinct. The dog crate helps to satisfy this need. If your canine friend could talk, he would probably say, “I love having a place of my own.

I have my blanket, my favorite toys, nobody bothers me in there and it’s all mine.” To you it’s a cage, to him it’s a home.

If crate trained, your pet can be spared the isolation of being in the basement, garage or the backyard. Use a crate, but don’t abuse the crate.

When purchasing a crate, it’s very important that you choose the correct size.

There should be room for the dog to turn around and stretch out on his side.

He should also be able to sit up without hitting his head. Just as important, if the crate is too large, your best friend may use the empty space as a place for elimination.

The cost of not buying a crate could be your shoes, favorite articles of clothing, shredded books, chewed table legs, ripped couch cushions and of course damaged wiring. The real cost however, is your dog’s safety and peace of mind.

When you begin the training process, don’t force your animal into the crate and fasten the door. It takes time to properly crate train your dog. Take your time, don’t make him feel as if this is a form of punishment.

At first, toss in a tidbit of his favorite food or treat and leave the door open. Throw his favorite toy or ball, let him see that he can get it and come back out freely.

One of your unlaundered shirts will also provide a sense of security.

When the training first begins, he should always feel free to leave the crate at his own will.

Just to be safe, check your dog’s collar to make sure that it can’t get stuck on the mesh or bars of the crate.

If an open mesh or wire crate is used, cover it with a large towel or light throw to give him a “den” feeling.

After your dog is comfortable with the going in and out of the crate at his will, start closing the door for five or ten minutes at a time.

Gradually increase the time by five to ten minutes more per day. Stay close by so the dog won’t be frightened.

Place the crate by your bed if you plan to keep your dog in it at night.

Let him see you and know that you aren’t too far away.

When you have gone through this process and are comfortable with the results, it’s time to leave your friend home alone.

Make your absence no more than a half hour with the maximum being no longer than an hour. Reassure him that you will be back soon and then do as you promised.

If you plan to crate your animal for longer periods of time, it is important that you have a friend or neighbor go over and let him out periodically.

Don’t think that the crate is an automatic babysitter for your pet and should never be used as a punishment tool.

There may be setbacks, but don’t give up. The keys are consistency and perseverance. With patience, the likelihood of the dog adjusting is very high.

Success is not guaranteed. Each dog, just as people, are individuals. If, after all efforts at positive conditioning your dog to the crate has failed, forcing the animal into such a situation is indeed considered inhumane.

Please understand that this method is entirely up to the owner. I have heard many positive things about crate training, just as I have heard the negatives. It’s an option, not a rule.

If the idea of crate training your animal makes you uncomfortable in any way, please call VVHS at 634-7387.

We have phone numbers of some excellent animal trainers in the Verde Valley, which will gladly help you with behavior problems.

New puppy challenges
Safe haven this holiday season
Tips on travel plans with your pet
How to crate train that new puppy
Ghosts, goblins and your pets
Event Calendar