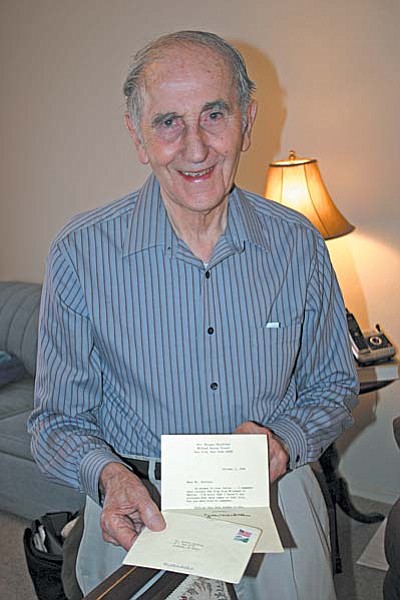 A letter from Jean MacArthur is one of Robert Salkind’s favorite souvenirs of World War II. VVN/Philip Wright

COTTONWOOD - On July 26, Robert Salkind, 87, of Cottonwood will receive the Philippine Republic Presidential Unit Citation Badge from the Embassy of the Philippines in Washington, D.C. The presentation will be made by a representative of the Office of Veterans Affairs at the VFW Post in Cottonwood.

A certificate for the badge states, "For Acts and Services of Exceptional Gallantry and Heroism rendered to the Philippines and its people during World War II."

Salkind entered the war from Australia where he was born and raised. "At 18, six months after Pearl Harbor, I was able to get into the U.S. Army because my dad was born in America," Robert said.

He didn't have any basic training. "I was given a uniform off of a dead soldier," he said.

In mid 1944 Robert was a Tech Sgt. His only training was how to shoot an automatic sub-machine gun. He said they put him on a small yacht out of Brisbane. "We got out in the ocean, and I thought, 'I'm out here all alone,'" he said.

What Robert didn't know was that Jean MacArthur, General Douglas MacArthur's wife, and the couple's 3-year-old son, were also on board the yacht.

Then he found out that his mission was to accompany Mrs. MacArthur on board the yacht for the 6,500-mile journey from Australia to the City of Manila in the Philippines. The trip took nearly two months.

"It wasn't a direct route," Robert said. "You had to be dodging the Japanese."

"Finally, we got to Manila," he said. But the general had not arrived. So the yacht had to hang out in the harbor for weeks. "We were right under the nose of the Japanese," Robert said. "That was the most dangerous part."

One night, the sky lit up with rockets and artillery.

"That's when I knew MacArthur was going to arrive, he said. "But it was a week or 10 days later, in the beginning of the Battle for Manila."

During the first week of January 1945, MacArthur arrived to get his wife. Robert said it was almost dark and a lot of torpedo boats escorted the general.

Robert said General MacArthur did not board his wife's yacht, but walked nervously around the deck of his boat waiting for her.

"All of a sudden, she shows up on deck in a great big white hat," Robert said.

For his involvement in the Battle for Manila, Robert received the Philippine Liberation Medal.