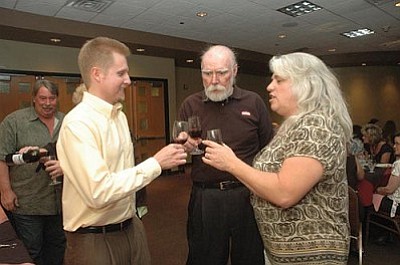 Eric Glenn of the UofA Agricultural Extension Service, toasts with Tom Pitts, chairman of the Verde Valley Wine Consortium, and Paula Woolsey, education committee chairman for the consortium, to the continued success of the consortium.

CAMP VERDE - Not since Secretariat first won Horse of the Year has a 2-year-old boasted as many accomplishments as the Verde Valley Wine Consortium.

The brainchild of Cottonwood City Manager Doug Bartosh and Economic Development Director Casey Rooney, the consortium has helped turn a few scattered vineyards and wineries into a wine-growing region that is starting to get the attention of the world.

Granted, not everything good that has happened to the valley wine scene is to the credit of the consortium, but there is no doubt it has played a key roll in the explosion of Verde Valley wines.

On Wednesday, members of the group, many who have helping promote the industry since the beginning, gathered at the Lodge at Cliff Castle to celebrate.

"There is no doubt the consortium was the right idea, with the right message at the right time," said VVWC Chairman Tom Pitts.

Along with creating an advertising machine, in something known as the Verde Valley Wine Trail and getting lots of free press from around the state and the nation, the consortium has managed to put in place an enology curriculum at Yavapai College that has already become a model for others.

Last month, through the efforts of the consortium and the generosity of Merkin Vineyards and Caduceus Cellars owner Maynard Keenan, the first acre of educational grapes was planted on the Verde Valley campus.

Today, there are 13 licensed wineries, 10 tasting rooms and at least 75 acres under cultivation in the valley. The wineries produced more than 50,000 gallons of wine in 2009.

The valley's 13 vineyards have planted at least two dozen varieties, with Cabernet Sauvignon, Zinfandel and Petite Syrah being the most popular.

Valley wines are now distributed in 26 states, and the Verde Valley has the distinction of being perhaps the only domestic wine-growing region outside of Napa to have its own movie (Blood into Wine).

"It is a testimony to what an all-volunteer army can do once it sets its mind to getting things done," Pitts said.

In addition to its own accomplishments, members also had an opportunity to celebrate the valley's own version of the movie Bottle Shock.

At the 2010 Judgment of Arizona Wine competition in Scottsdale a few weeks ago, Arizona wines went toe-to-toe with wines from Europe and California.

Stronghold also picked up a gold medal for its 2008 Nachise at the Lone Star International Wine Competition, along with a fistful of silver and bronze medals. The Texas event, held two weeks ago, featured more than 600 wines competing for awards.