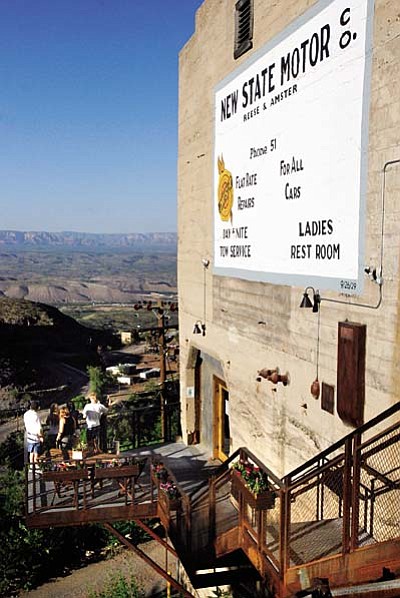 Jerome was once a roaring mining town with 15,000 people and multi‑storied buildings and fine homes. It was incorporated in 1899, but with the fall of copper prices and the closing of the Phelps Dodge Mine in 1953, it became the world’s largest “ghost city.”

Well, never quite a ghost town. A population that was at an all-time low of about 50 in 1967 has grown to about 450 very diverse citizens.

In the foothills of central Arizona’s Verde Valley, surrounded by the Prescott National Forest, the town is at an altitude of 5,248 feet.

Jerome produced more than a billion dollars worth of copper, gold, silver and zinc in its 70‑year active life. Today, life is quite different. The town was designated a National Historical Landmark in 1967. Its economy is now based on tourism and recreation. World-class art galleries, along with antique, craft and gift shops, and boutiques are located in the once‑deserted stores along the main road. Jerome offers a wide range of community facilities that include its three museums, three parks and one library.

There are several B&Bs, hotels and restaurants in town. A few of the restaurants are open late into the evening. There are also two historic saloons, Paul & Jerry’s and the Spirit Room.

The Historical Society’s Mine Museum offers historical walking tours weekdays by appointment at a small charge.

Jerome State Historic Park, “down the hill” from the center of town, features the former Douglas Mansion which has been converted into a museum with exhibits on the area’s history. It is currently closed to the public as Arizona State Parks conducts repair work.

The Jerome Home Tour celebrations are held the third weekend in May. Other attractions include a Sliding Jail and The Gold King Mine, the monthly First Saturday Art Walk and the Ghost Walk in October.

The Town of Jerome is governed by a mayor, four council members and a town manager; there is a police department and a historic fire department with 25 volunteer firefighters.

For further information, contact: Jerome Chamber of Commerce, Main Street, P.O. Drawer K; Jerome, AZ 86331 or check out its Web site at www.jeromechamber.com. The chamber is staffed by volunteers and can be reached by telephone during limited hours at (928) 634‑2900.