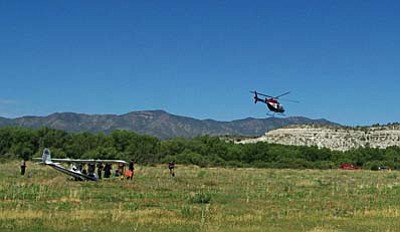 Photo courtesy of YCSO<br /><br /><!-- 1upcrlf2 -->A medical helicopter was brought to the scene for the wounded pilot.

An 80-year-old Camp Verde man was injured Monday when the private airplane he was flying crashed in an open field off Shae Lane in Camp Verde.

According to emergency personnel, Robert Worgull suffered injuries to the lower extremities and was air-lifted to Flagstaff Medical Center once he was extricated.

The incident happened shortly after 8 a.m. June 28 when Worgull's homemade, single-engine experimental aircraft lost power in flight and came down near the end of Middle Verde Road.

A witness told the Yavapai County Sheriff's Office deputies that a loud banging noise brought him outside in time to see the aircraft make a low pass over his house. He followed it on his ATV to the crash location. According to YCSO, the witness stayed with Worgull until emergency personnel arrived.

Rescue units from the Camp Verde Fire District found the plane in the middle of the field and hiked to the location. Worgull was reported as conscious but injured when they arrived. He was placed aboard the Angel-3 medical helicopter.

The event is under investigation by the Federal Aviation Administration.