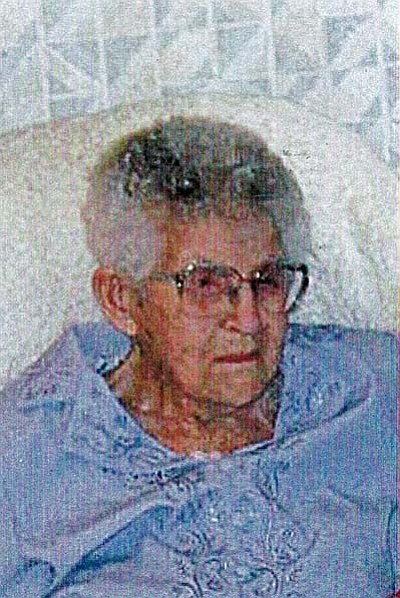 She was raised around the cow camps as her father had a large herd of horses, cattle and some goats. They followed this herd wherever the grass was good on the open range in West Texas. At a very young age, she was in the saddle of a half broke horse helping to herd the livestock or helping her mom cook at the chuck wagon. When she was of school age, she was taken to Marathon, Texas, to live with an aunt to attend school.

In the summer time, she would return to the ranch to be with her family. Her father became the foreman for the Gage Ranch in West Texas and later the Combs Ranch. She out lived her two brothers and two sisters. Poncho Villa was a regular visitor and friend to their homes in the Big Bend area of Texas.

Her father had asthma real bad and the doctor told him to move to a location where there were pine trees and he would get some relief. They headed for Oregon but camped in Flagstaff, Arizona, on their way and found it to be the place to settle as his asthma was much better.

In 1957, they sold the farm and ranch east of Flagstaff and moved to town and then later moved to Clarkdale where they made their home until Othel H (Shorty) died in 1968. She worked for Jim Ziemkowski who had the grocery store in Clarkdale. Laura went to live with Montie and LeEtta in Las Vegas, Nevada, then to Colorado with them before moving back to the Verde Valley.

Laura is a Mom, Grandmother, Great Grandmother and a Great-Great Grandmother. She is survived by her son and two daughters, their husbands and wives, 10 grandchildren and a whole passel of children by those 10 children. She was a grand lady who loved her family and kept track of all birthdays and important times of their lives until the end of her life at over one hundred two years old. Service will be at the grave side in the cemetery in Flagstaff. Arrangements were made by Westcott Funeral Home, Cottonwood. In her memory, rather than flowers, donate to your favorite charity.