A Violent Past
A brief history of the Verde Valley volcanoes 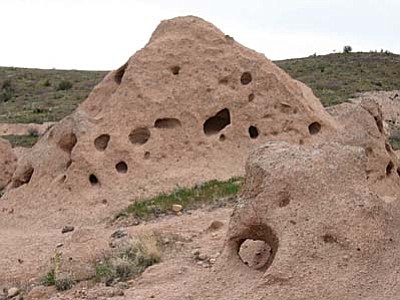 Known locally as the Tee Pee rocks, the Cottonwood Basin Fumaroles are the result of volcanic ash falling on what was once a freshwater lake that covered the Verde Valley. The steam mixed from the lake&#65533;s calcium-carbonate-rich water deposited calcite into the ash, forming a cement-like shell around the vents that were exposed when surrounding lake sediments eroded. VVN/Steve Ayers<br/>

CAMP VERDE - River valleys are by nature drainages cut into the earth's crust by water flowing across the surface over long periods of time.

But such is not the case for the Verde Valley. It has been formed and shaped by forces far greater than that of running water.

The predominant force has been the energy generated by the shifting, slipping, sliding, pulling, pushing, rise and fall of the enormous tectonic plates that define the world's landmass, and well as its ocean floors.

About 17 Ma (geologic shorthand for "million years ago") the crust of the American southwest was extended when one tectonic plate attached itself to another, then drifted in the opposite direction. The pulling force created an extensive series of basins and mountain ranges as the fractured surface lifted and fell.

The Black Hills, Wilson Mountain near Sedona and the Verde Valley itself are all the result of huge blocks of crust rising and falling along the fault lines created as the crust extended to the west.

The Verde Valley was created when one of those blocks, a keystone shaped slab known as a graben, dropped in relation to the surrounding landscape.

But there is another force that has also laid its hand on the valley's landscape -- that which was released when the molten mantle beneath the crust vented to the surface through the faults created between the blocks.

We know that force as volcanism.

There is hardly a surface of the valley, or the surrounding highlands, that is not in some way shaped by lava flows or ash and cinder deposits cast up from the deep.

The top of the Black Hills, as well as the surface of the Mogollon Rim, is capped with layers of volcanic deposits, as is the top of the graben now buried beneath the surface sediments of a former inland lake that covered the valley floor between 2.5 and 10 Ma.

And, if you know what you are looking at, the cones and necks of a couple of ancient volcanoes dot the skyline.

On top of Mingus mountain, along with much of the Black Hills, is a layer of basalt, the planet's most abundant rock. It is formed by slow moving lava.

The basalt layer atop the Black Hills is called the Hickey Formation, created by a series of vents and fissures that erupted through the fractured crust from 15 Ma to about 10 Ma.

To the north and east of the valley is the Mormon volcanic field. It erupted across the landscape beginning about 13.6 Ma and did not rest until about 3 Ma.

The Mogollon Rim is also covered in a layer of volcanic cinder, ash and basalt deposited by the San Francisco volcanic area, the same source of the 12,000-foot peaks that tower over the valley's northern skyline.

Other volcanic events near Perkinsville west of the valley and 13-Mile Rock to the east also spread a layer of distinctively black, porous rock.

But as obvious as all that black rock is, the valley's two largest volcanoes are not.

House Mountain is a gently sloping hill located a dozen miles south of Sedona and just north of Cornville. Page Springs is located at the base of its western slope. It is such a subtle landmark that it wasn't until the 1980s that it was found to be a shield volcano.

Shield volcanoes are the quiet ones, such as those that are currently forming new land in the Hawaiian Islands. They spew molten lava that flows slowly down their sides. They don't typically erupt in the violent manner of, say, Mount St. Helens or Mount Vesuvius.

The lava that erupts from a shield volcano flows gently down the slopes because its composition is low in silica and less viscous, therefore allowing the dissolved gasses to escape to the atmosphere rather than building up in the magma.

Geologist Wayne Ranney was the first person to see House Mountain for what it was. His work as a graduate student at Northern Arizona University demonstrated the volcano was close to 14 million years old, much newer than the Mogollon Rim that rises above it.

That means there was a time in the life of the House Mountain volcano in which you could have looked down from the top of the rim into the throat of the volcano. Unfortunately, there weren't any humans around at the time to take in the sight.

And because the volcano was erupting against the face of the ancient Mogollon Rim to the north, lava spewing from its central vent flowed only to the south, the east and the west. Had the rim not been there, the volcano would have filled the valley that is now the Village of Oak Creek.

The durable basalt that flowed from House Mountain still remains, but the softer sandstone that was once the rim has since eroded, retreating nearly four miles to the north and leaving a three-sided volcano.

Over time, the same lake that formed the white rock sediments we know today as the Verde Formation covered the inactive volcano. Ranney, in his study of the volcano, discovered lake sediments at the top of House Mountain -- sediments that have since eroded away to expose it for what it was.

If you look to the south and east, down the valley in the direction the Verde River trends, you will see three mountain peaks on the near horizon. The two on the right, with the rugged tops, are the Towel Peaks.

The more round one on the left is Hackberry Mountain, a volcano with a checkered past.

Unlike House Mountain, Hackberry Mountain spent much of its active life as a highly viscous, highly explosive, silica-rich volcano, of the same type as St. Helens and Vesuvius. There is also evidence that it erupted as a shield volcano, at least part of its life.

During its quiet periods, it spewed smooth basaltic lava. Those flows often spread to the south and west, interspersing with the sediments laid down by the freshwater lake that covered the valley floor.

Initially geologists believed the lava flows from the Hackberry Volcano formed a dam that backed up the Verde drainage, creating the ancient lake. However, more recent studies have demonstrated that was not the case, although from time to time the flows did block the drainage.

During its more violent eruptions, though, it threw ash and cinder miles away from its central vent. Some of that ash landed on the lakebed, and in at least one place, created some unusual geologic formations.

Approximately one mile down Fossil Creek Road, off State Route 260, is a place locals call the Tee Pee Rocks, conical formations that are pockmarked with cavernous openings.

The unusual formations are called fumaroles. They are the result of hot volcanic ash falling on a surface that is saturated with calcium rich water, such as the shores of the former "Lake Verde." The water in the ground turns to steam and vents upward through the fallen ash.

Where the calcified water comes in contact with the ash a layer of cement-like material is formed. Over time, the softer ash around the vents is eroded, leaving the conical shaped vent pipes exposed.

The pockmarked holes are the result of water eroding the base of the cones as they slowly expose themselves to the elements.

The Cottonwood Basin Fumaroles resulted from an eruption of Hackberry Volcano that took place about 7 Ma, give or take a Ma.