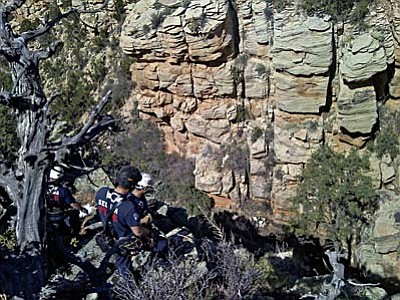 SEDONA -The Sedona Fire District was dispatched to help an injured hiker in a canyon on the Hot Loop Trail on Sunday. The trail is off of Jacks Canyon Road near Pine Valley in the Village of Oak Creek.

From the trailhead, it took crews 90 minutes to hike with medical equipment to the top of the canyon above the hiker where they determined the injured man had a lower leg injury with obvious deformity at the ankle.

Faced with a 140-foot shear drop-off to reach the hiker and the need for manpower and equipment, crews summoned a DPS Ranger helicopter. The Flagstaff Ranger was unavailable, so Ranger 41 was dispatched from Phoenix, as well as Angel 3 air ambulance from Cottonwood. Five more rescuers and technical equipment were shuttled by helicopters to a landing zone near the injured hiker. Using a high-angle rescue technique, Firefighter Johnny Sedillo was lowered down to the patient. The lower leg injury was treated and the hiker was packaged and lifted 140 feet to the rim of the canyon. Crews then used a stokes basket to lift the patient to Angel 3 to go to Flagstaff Medical Center. The rescue required eight crews and 4.5 hours to complete.

Sunday, about 2 p.m., Sedona crews were called to an injured hiker at Fay Canyon, near the Boynton Canyon and Boynton Pass Roads intersection. The hiker was at the end of the trail, halfway up the mountain. The rescue also needed technical equipment and a trained technician. The hiker had a lower leg injury on a section of the trail with over 100 feet of near-vertical rock face.

The patient was carried about 1.5 miles to the trailhead to a ground ambulance. The rescue needed 10 crewmembers and 4.5 hours to complete.

From Saturday, March 13 through Sunday, March 21, the Sedona Fire District was called to five other injured hiker calls at Fay Canyon and twice at Bell Rock. In Oak Creek Canyon, they had calls at West Fork/Call of the Canyon and Midgely Bridge. These seven calls required an average of 7 crewmen and 2.5 hours to complete.