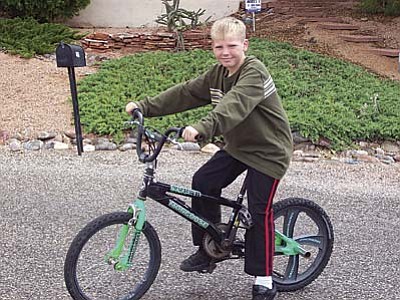 Meet Bubba, a friendly, outgoing 9-year-old. He is being raised by his single-mom, along with an older brother and an older sister. Bubba has been on the “waiting list” for a Big Brother or Family Match for quite some time. Maybe he is waiting for someone just like you!

Bubba is athletic and energetic. He loves to ride his bike and plays on his school’s soccer team. At home, he watches television and sometimes plays video games. He enjoys attending church and Bible study and would like to learn to play the guitar. Bubba’s favorite food is pizza.

Bubba really likes school and he gets good grades. He does get bored easily, but his teacher is good with keeping him engaged. His best subject is math. He works on his reading with his mother after school. He describes himself as a hard worker and a good listener, with a lot of friends. He finished this sentence “If I keep going the way I am now, I will” with “become really smart when I grow up and I might be a teacher.”

Bubba would like to be matched with a Big Brother that would go with him bowling, golfing, fishing or horseback riding. He is also interested in exploring the Native American sites around the area.

His mother describes him as kind, obedient and athletic. She thinks Bubba would best be matched with a Big Brother or Family Match that are active and outdoors-oriented.

Want to do even more to help kids in our community? It’s not too late to be a part of Bowl For Kids’s Sake 2010, presented by Credit Union West.

It’s NOT about bowling, it’s about brightening the future for the next generation, building community and celebrating with those who make it possible.

Find out how you can STILL put together a team or make a donation, call or email us today!