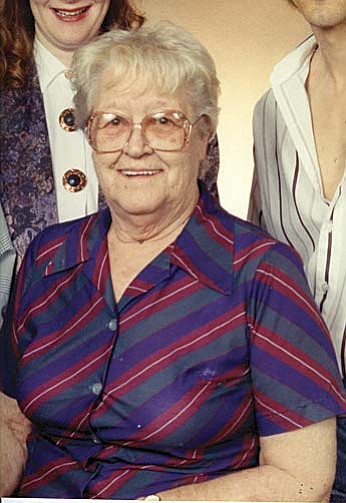 Eunice Augusta Collins, 88, of Camp Verde passed away May 2, 2010. Eunice was born February 10, 1922 in Bemidji, Minnesota to the late James and Elsie (Seward) Rogers.

At eight months, Eunice was stricken with polio, however through a series of experimental surgeries (only the second such surgery in the US) she recovered remarkably well. On January 2, 1942 she married her sweetheart, Nial Collins.

Eunice was a master professional seamstress and worked for Grubers clothing manufacturing for more than twenty years. She also owned her own sewing, tailoring and alterations shop. As a military wife she raised her children while her husband was away at war. She will be remembered as an intelligent, independent, and sometimes stubborn woman. She was a life member of VFW Post 6739 of Camp Verde. Eunice is survived by her children Shannon Beck of Camp Verde, and Lawrence Collins of Nevada; her sister, Arlys Erdley of Phoenix; her grandchildren Robert Collins, Shannon Hall, Brandon Hall, and Laura Lawrence; and thirteen great-grandchildren. A memorial celebration of Eunice’s life will be 11:00am Friday, May 7, 2010 at the VFW Post 6739, 377 W. Highway 260, Camp Verde. Please share your condolences at www.buelerfamilyfuneralhome.com