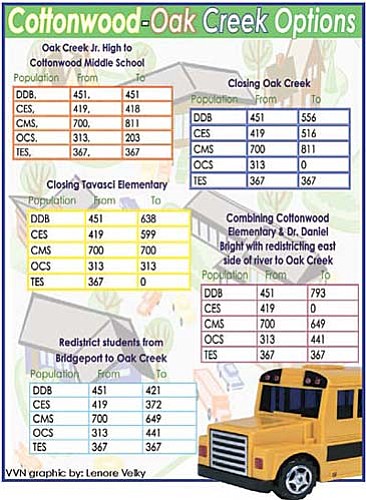 COTTONWOOD - About 100 people attended the Cottonwood-Oak Creek School Board meeting Tuesday night to learn more about the possibility that the district might be forced by budget constraints to close one of its five campuses. Several people spoke in opposition to such a closure, especially of Oak Creek School in Cornville.

Superintendent Barbara U'Ren presented the information that staff has gathered for the school board to consider. She explained that last month the district received the state budget. At that time, the administration put together a "laundry list" of cuts that could be made by the district to save money and balance its budget.

U'Ren said everything - "from the very small to the very, very large" was included on that list.

"When you put something on paper," U'Ren said, "it creates a panic."

She was referring to a meeting that was called at Oak Creek School following last month's board meeting. During that meeting, U'Ren presented two possible budgets to the board. The worst-case budget was created in case Proposition 100 fails to increase the state's sales tax temporarily by 1 percent. On the list of options for that situation is the possible closure of one of the district's schools.

"Our families love their schools," U'Ren said, "and that is a good thing."

She said the governing board is now gathering information. "We have to wait for Prop 100 to see what happens there," she said.

"These conversations are not easy," U'Ren said. "It is our job to look at everything."

She said the board is also looking into what other school districts are considering to help balance their budgets. She said that if Prop 100 fails, all districts would be using furlough days to create savings.

Other possible measures include sharing nurses among the schools in the district instead of maintaining a nurse at each one. Retirement benefits could be affected, as well as sports programs.

U'Ren presented information that was developed to determine what the cost per student is at each of the district's five schools. Also, she presented statistics on how closing a campus would affect the other schools.

The population of the district is about 2,250 students. The impact to the population of individual schools depends on what, if any, closures or student transfers the governing board would decide to make.

If junior high students were transferred from Oak Creek School to Cottonwood Middle School the only population change would occur to those two schools. OCS would drop from 313 students to 203. CMS would increase from 700 to 811.

If OCS were closed, its population would of course drop to zero. Tavasci would remain the same at 367. CMS enrollment would go up to 811. The enrollment at CES would increase from 419 to 516, and DDB would go from 451 students to 556.

If Tavasci were closed then OCS would remain steady at 313 students. CMS also would remain at 700 students. CES would increase its enrollment from 419 to 599. DDB would see an increase from 451 students to 638.

Another possible scenario would be combining DDB and CES through redistricting the east side of the Verde River (Bridgeport), closing CES and sending the students to OCS and DDB. CES would drop to zero students, and CMS would drop from 700 to 649 students. TES would remain steady at 367 students. OCS would increase its enrollment from 313 to 441, and DDB would see the biggest increase in students from 451 to 793.

After U'Ren's presentation, board president Randall Garrison said the board has been dealing with these budget cuts for two years.

"This is nothing new," he said. "It just keeps getting worse."