Think before you take the plunge! 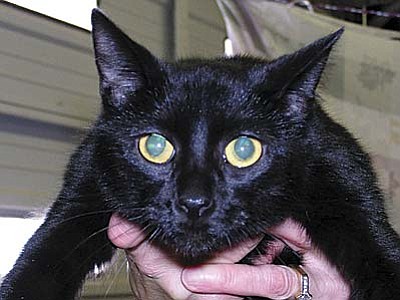 The Verde Valley Humane Society &#8220;Pet of the Week&#8221; is &#8220;Justice&#8221; a female black cat. She has short hair that is easy to maintain, but she still loves to be brushed. Justice is very playful and has a great personality. She is calm but still lots of fun. Give her a feather and sit back to be entertained. Her adoption fee has been discounted by $20 thanks to our generous sponsors.

Over the last few weeks we have adopted many puppies to new families. The number one problem seems to be getting the housebreaking routine in order.

It’s not a reason to bring an animal back to the shelter, it means you have more work to do and that you haven’t used enough patience.

Normally human babies aren’t potty trained in a week, so it’s not fair to expect it from an animal.

If the decision has been made that you are ready to adopt a puppy and not an older dog, I hope that you have really given it a great deal of thought.

Yes, puppies are cute balls of fluffy fur and are so much fun to watch and play with but, they are also work and are going to be full grown dogs.

Many times when puppies are adopted, they are brought back to the shelter in just a few days for one reason and one reason only. They are being puppies.

All it takes is time, teaching and patience for these little creatures to learn the rules and routine in your home.

It’s amazing that people don’t understand that pups don’t come programmed to do what we want, when we want.

They have to be trained. That’s our job and sometimes at times it can be very challenging.

It’s pretty fair to say that undesirable behavior in an animal is due to a lack of training on our part.

By the way, he’s probably going to spill his water and do other annoying things such as rolling the toilet paper off the holder in the bathroom. That’s what puppies do.

It’s your job as a new pet owner to teach the puppy correct behavior patterns and manners. If you feel that your training skills are inadequate don’t be afraid to ask for help.

There are excellent books available at the library, plus expert trainers and many internet sites that can help tremendously.

Now I’d like to talk about one of the biggest problems that come up when adopting a new pup. Housebreaking, at times seems to take forever to accomplish.

Before you begin this task, make sure that you have taken your newly adopted puppy in for a vet visit.

Make sure that your new pet has a clean bill of health before expectations are put on him or her.

As I think about this whole process I have to look back and laugh a little. I know that I have spent my share of hours standing outside in the freezing cold or rain in my robe and slippers with a flashlight at midnight, hoping to see a trickle of urine being expelled from my pup.

After I go through the process of standing outside for fifteen minutes without anything happening, we head inside the warm house to find out that my pup had saved her elimination process for the carpet in the living room. Guess it’s too cold outside for her too!

How can they sniff that many places, cover so much territory, turn in circles so many times in a row and not go to the bathroom? It totally mystifies me.

But then as soon as those little feet hit the inside of the house, they find their spot. Patience, once again I repeat… patience.

Frequently taking your puppy outside to eliminate is the first order of business in the housebreaking department.

You should take him outside immediately after he awakes, chews his toys or bones, after he plays and again 15 to 30 minutes after he eats. This should be repeated at least 6 to 8 times per day.

Once outside, guide the puppy to an area that you prefer he would use on a regular basis. The puppy should then be allowed to sniff and investigate potential places that he would possibly like to eliminate. (put him on a leash, this helps with leash training)

A consistent location should be used so that previous odors can help stimulate the puppy to urinate or defecate.

Movement can help stimulate elimination, but playtime should be discouraged until he has done what he went outside for in the first place

While your puppy is eliminating, repeat a key phrase, such as “go potty” or “do your business”. The puppy will learn to associate this phrase with elimination.

Don’t confuse him; choose a phrase that you don’t normally use in conversation. As your pup catches on to the routine, he can be taught to sit by the door, bark at the door, ring a bell or any other signal you might want him to use.

Another way to teach a puppy to signal its need to go out is to use another key phrase, such as “need to go outside?”

They usually get pretty excited when that question is asked, running to the door giving you the answer that you were looking for.

It’s important that you are outside with your pup during this training period. You need to be sure that he really has eliminated outside and won’t have an accident inside because he was too busy playing to “do his business” while he was outside.

Reward him with praise or a treat as soon as you see him eliminate. Rewards can be treats, praise or even with playtime.

He needs to associate the reward with eliminating outside in the desired location.

If you find that your puppy has had an accident in the house, don’t drag him over to the waste, shove his nose in it and scold him.

He has no idea what he has done wrong. Make sure that you clean the soiled area with a pet safe cleaner that eliminates the odor completely. This will discourage future elimination in the same area.

If you find him getting ready to eliminate in an improper place, use an aversive noise or even a loud vocal command that can startle the puppy and stop the behavior.

Quickly get the puppy to the appropriate location and wait for the elimination process.

When elimination occurs, praise the little guy and begin all over again the next time.

The good news is, with proper supervision and frequent access to the desired location, most puppies can be housebroken by 14 to 20 weeks of age.

Not such a terrible length of time to spend on someone that is going to devote his whole life to you, is it?