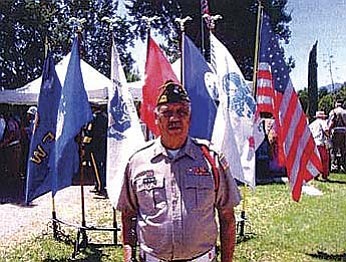 Frank Macias Contreras, 84, of Cottonwood died May 14. He was born April 2, 1926 in Clarkdale, the son of Julio Aguilar Contreras and Conception Flores Macias.

He was a graduate of Clarkdale schools and earned a business degree at Hinds Junior College. He retired from Phoenix Cement Company in the 1970’s. He owned and operated Mr. C’s Drive -In Restaurant which is now Su Casa Restaurant in Clarkdale.

A lifetime member of Veterans of Foreign Wars Post 7400, he served on their Honor Squad.

He was a member of Immaculate Conception Church. He enjoyed training his favorite appaloosa horses and playing golf. He was a very successful coach for the Women’s Softball League in Clarkdale for eight years. He was the best father and grandfather and taught us how to treat people with kindness and respect.

He was preceded in death by a daughter Yolanda Rhodes Contreras and his wife, Virginia Soto Contreras.

A visitation will be held on Thursday, May 20 in the Westcott Funeral Home from 5-6 PM followed by the Rosary at 6 PM.

A Funeral Mass will be held on Friday, May 21 in the Immaculate Conception Catholic Church at 11 AM. VFW Post 7400 will provide military honors.