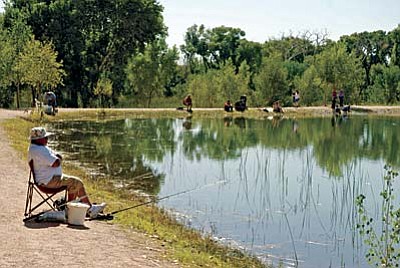 Dead Horse Ranch State Park and the Verde River Greenway are an interlocking union of a whole experience of the Cottonwood-Willow riparian habitat that brings so much life to the Verde Valley. Without the river, the park would not exist in its abundant state.

Located in the heart of lush free-flowing Verde River riparian corridor, the 423-acre state park is an oasis for wildlife. Only minutes from Cottonwood’s busy Main Street, it is a haven for humans to leave behind their hectic world and retreat alone or relax with family and friends.

A six-mile reach of the river is known as the Verde River Greenway. Its unique ecosystem is reportedly one of less than 20 Fremont Cottonwood and Gooding Willow riparian galleries in the world. Life along the river changes with the seasons, giving a glimpse of the numerous species of raptors, neo-tropical migrants, resident songbirds, mammals, reptiles, amphibians, and fish. The population of birds has spawned the Verde Birding and Nature Festival that attracts locals and visitors alike during the peak of migration in late April.

The 3,300 foot elevation accounts for mild temperatures ideal for camping, mountain biking in the park and the neighboring Coconino National Forest, hiking along the Verde River, canoeing, picnicking, fishing, or just wading in the cool water.

In addition to the river, the State Park now includes three lagoons that are well-stocked and popular with fisherman and canoeists alike.

Dead Horse Ranch State Park was the first state park that was entirely purchased by the state and not donated. Arizona acquired 285-acres of the “Cap” Ireys ranch for $125, 000 in 1972 and the park opened in 1977. The Ireys’ children had named the ranch for a dead horse they saw when the land was originally purchased and the name became a condition of the sale to the state. Ireys kept three parcels on the land, that eventually were sold to the state as well. One of the parcels formed the first link in the future Verde River Greenway.

It was a dream of Governor Bruce Babbitt and administrators in the State Parks Department to preserve the Cottonwood canopy that followed the Verde River through the Verde Valley. Babbitt tells of how he frequently walked along the Verde River as a young man and wanted to protect the stretch between the Verde River Bridge and the Tuzigoot Bridge. In 1986, the Arizona Legislature passed the Verde River Protection Bill seeded with $2 Million set aside to protect riparian habitat upstream disturbance created by construction of the Central Arizona Project.

The project has continued to grown by both acquisitions of land and conservation easements. The Greenway now totals 600 acres with a recent purchase in Camp Verde outside the original boundaries.

How Much: Entrance fee $7 per car (up to four adults); $3 individual or bicycle. Fees for camping, RV hookups and cabins additional