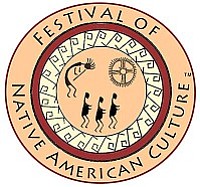 Although still in its infancy, the Festival of Native American Culture, is quickly becoming a major event for the Verde Valley

Founded by Ken Zoll, president of the Verde Valley Chapter of the Arizona Archaeological Society, in 2009, the festival was conceived as a fund-raiser to support protection of archeological sites.

The festival is also done in partnership with Indian tribes and organizations to help funnel money to Native American projects and scholarships.

"This is an event that celebrates, supports and protects the valley's Native American culture, in many ways," says Zoll.

Last year's brought in visitors from all over Arizona and the Southwest for a wide variety of exhibits, an archaeoastronomy conference, Native American Film festival, art show and archaeological tours.

This year's festival, which runs from June 5 to June 12, will include more tours and outdoor events along with the very popular art show and film festival.

According to Zoll, last year's art show drew praise from the vendors, which included some of the premier Native American artist in the country.

"We actually filled out limit of 40 vendors fairly early this year, simple because the word got around that it was a great show. All the artists participating are well recognized for the medium in which they work. This isn't flea market Indian art," says Zoll.

The show will take place on Saturday and Sunday, June 5 and 6 at Tequa Plaza in the Village of Oak Creek. Admission is free.

Other major events at this year's festival include the Native American Film Festival at the Sedona Creative Life Center, also on Saturday and Sunday, June 5 and 6. Seats run $4 to $9, depending on the show.

The films being shown this year, in association with the Sedona International Film Festival, are all being presented in partnership with the Association on American Indian Affairs. Several are award winners. The proceeds of the film festival will support the 50-year-old AAIA scholarship program.

For a complete list of events, schedules and costs, visit www.NAFestival.com.