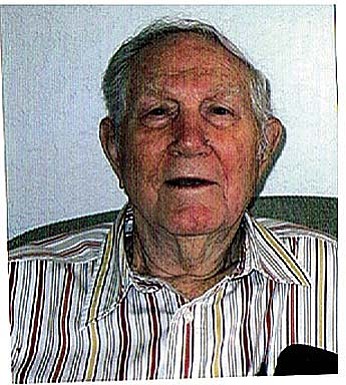 He received a Bachelor’s Degree from Bethany College and a Masters Degree from North Colorado State University.  He served his country in World War II in the Marine Corps and fought in Iwo Jima, Choiseul and Vella Lavellay as an expert rifleman.

He was a teacher for 38 years in Lawrence, Kansas, Hutchinson, Kansas and in LaGrange, Illinois. He also taught courses in Lapidary at Yavapai Community College.  In 1947 he was an outstanding athlete for the Kansas-Missouri Football Bowl. In 1997 he was an inductee into the Sports Hall of Fame at Bethany College and was awarded the 2006 “Marine of the Year” from Marine Corps League.

His hobbies were in Lapidary and Gemology, the Marine Corps League Toy for Tots and enjoyed Sudoku. He also assisted the elderly with tax preparation from 1984-1999.

He was preceded in death by three brothers, Earl McClure, Lauren McClure and Merle McClure.

He is survived by his wife of 62 years, Betty Jo McClure; a son Kevin McClure of Flagstaff and a daughter Lucinda Taylor (Ralph) of Upland, California, two grandchildren and two great-grandchildren.

A memorial service will be held on Friday, November 12 in the Westcott Funeral Home at 2 PM. VFW Post 7400 will provide military honors.

Donation in his memory may be made to the Marine Corps League Scholarship Fund, P.O Box 2286, Cottonwood, AZ 86326.