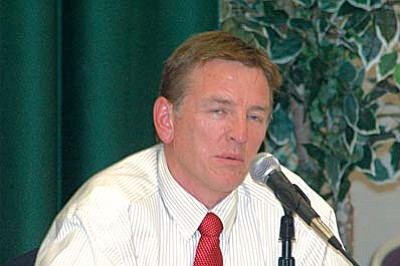 Gosar was among at least 57 Republicans who took seats away from House Democrats, easily taking back the House majority.

"People are upset," Gosar said in explaining his win. "People want to be heard."

The first thing he wants to do is talk to people via a series of meetings throughout his sprawling rural district, and hear what they want Congress to do with issues such as health care and the economy, Gosar said.

"People want to be part of the solution," he said.

Both Gosar and Kirkpatrick live in Flagstaff but they were in Prescott when the first election results came out about 8:20 p.m., showing a 12-point lead for Gosar that didn't change much over the course of the evening.

Supporters gathering with Kirkpatrick breathed a collective "Oh no!" at the sight of the first results, but Kirkpatrick herself was already gone.

Kirkpatrick had announced she would be at the Casa Bonita Restaurant next to her Prescott headquarters to watch election returns, but shortly before any results came out, she retreated to her office and didn't return for at least 45 minutes.

Kirkpatrick called Gosar at about 9:35 p.m. to concede.

"They're riled up" about the economy, said Kirkpatrick's mother Nancy Kirkpatrick Wright of Prescott.

"People are voting against their self-interests because they think erroneously that government-funded health care is the wrong way to go," said Kirkpatrick supporter Jo Kelleher. "The electorate was sold a bill of goods by the Tea Party rhetoric and right-wing ideology."

"Even though the outcome tonight was not what we wanted, I feel so lucky to have had the chance to serve the First District of Arizona," she said. "I am proud to have stayed focused on what really matters to folks here - creating jobs and getting folks back to work."

Shortly after the initial results from early voters came out, Gosar came to The Palace Restaurant and Saloon on Prescott's Whiskey Row to celebrate with the trio of winning Republicans from Legislative District One - Senate Majority Whip Steve Pierce of Prescott, House Majority Whip Andy Tobin of Paulden and Representative-elect Karen Fann of Prescott. Gosar's parents also joined him from Wyoming.

Yavapai County Republican Party Chair Jan Smith was especially celebratory since Election Night also was her birthday. Gosar delivered her cake to her.

The Republican sweep of the Legislative District One races was no surprise, since the district is dominated by conservative Yavapai County.

Yavapai County Republicans turned out in strong numbers for Gosar. By at 11 p.m., Yavapai had the highest voter turnout of any county in the state at 61 percent.

Gosar supporter Mal Barrett Jr. of Prescott said he was surprised just how well Gosar did in Yavapai County, where about one-third of the election's CD1 voters live. He estimated Gosar needed to win by 12,000 votes in Yavapai to win the election, but by press time he already had about 18,000 more votes in Yavapai and was ahead overall by 8 percent, with 365 of the 392 precincts reporting. Yavapai voters picked him by a 26 percent margin.

Kirkpatrick was leading in Coconino, Navajo and Apache counties.

One disappointment for party leaders Pierce and Tobin were the votes on propositions 301 and 302, meant to help balance the state's budget. Voters overwhelming opposed taking money from the Land Conservation Fund and the First Things First fund for children.

"We thought they'd go down, because there wasn't any (campaign) money to promote them," Pierce said.

Now the Legislature is $830 million short in this year's budget and it will have to cut more in areas where it didn't want to cut more - public safety and education, Tobin said.

Fann said she has a leg up on most freshman legislators because of her long-time municipal experience, and the first thing she will focus on is "balancing the budget and getting this economy turned around."