Cottonwood's Tim Freriks to run in national championships Nov. 22
NAU coach: 'For us to win, Tim has a pretty big role' 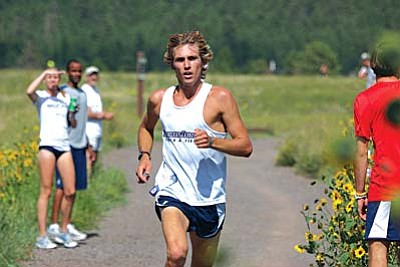 According to NAU Coach Eric Heins, Freriks is exactly where he belongs running alongside such elite athletes. “Tim is an interesting case. He hadn’t run blazing times in high school and then he comes along and runs an 8:58. We were all asking where the heck did this kid come from. He was right in our backyard. He ran so well on the national stage in high school, it’s not a surprise to see him doing so well now.”

In a few more weeks, Freriks will be on that stage.

Now a sophomore at Northern Arizona University, the Mingus Union High School product is viewed as a key and essential ingredient to a Lumberjack team that is among the nation's elite. Senior David McNeill finished second in this race a year ago and last spring claimed a national title on the track at 5,000-meters.

Last weekend, McNeill and teammate Diego Estrada finished 1-2 in the Big Sky Championship race, covering the 8-kilometer Cheney, Wash., course in 21:28 and 21:30, respectively. Such dominance was expected from NAU, but what surprised some was the sixth-place finish by Freriks, who was the No. 3 runner for NAU in 22:17.

"It certainly was my best race since I've been here," admitted Freriks, who ran one of the nation's fastest times over 3,200 meters as a Mingus senior. His 8:58 clocking is one of only eight sub-9 minute prep 3,200-meter clockings in Arizona history.

NAU Coach Eric Heins said Saturday's breakthrough race by Freriks has been more than a year in the making. "I know he was frustrated and did not feel he was our 6th or 7th man. We recently backed off on his mileage and that helped a lot. Mentally, he is coming around. We've been waiting for it to happen; it was just a matter of time. He is extremely focused and he does the work, so it was bound to happen."

For NAU to win the national championship, Coach Heins said the real burden rests with the team's 4-5-6 and 7 runners more so than the top 3 of McNeill, Estrada and junior Amhed Osman.

"It's going to be a big challenge," Heins said. "We have three young men who will be a very low score, so the performance of our other runners is crucial. For us to win, Tim has a pretty big role in that."

Freriks is already past the excitement of the Big Sky race. "In the scheme of things ... a finish at Big Sky doesn't mean a whole lot if it doesn't translate into strong finishes at NCAA Regionals and Nationals.

"On paper, NAU's chances of winning the meet are very good. A glance at our potential top-five here includes a two-time 5K NCAA National Champion and IAAF Worlds 10K participant (David McNeill), a 13:47 5k freshmen 28:40 10K as a soph who has always done well at the Pre-National meet (2x top-5 finishes) in Diego Estrada, an All-American and 28:52 10k runner in Ahmed Osman, a 13:55/28:52 5k/10k guy in Ben Ashkettle, and a 4:00.2 miler and 5th place finisher at NCAA DI National Cross Country meet last year in Jordan Chipangama ... Unfortunately two of those five have been injured this season, Jordan Chipangama and Ben Ashkettle. That just makes it so much more meaningful for a group of us next in line to step up. Without those runners we aren't as strong on paper, but it isn't going to stop us from shooting high and thinking the same way we would be with Jordan and Ben. We want to be up there and contend come Nov. 22nd."

Freriks said his progress at the collegiate level is all part of a long-term formula established years ago by Mingus Coach Jim Bostwick. "The conversion between high school and college certainly wasn't easy but it wasn't a huge challenge either for me ... Having a guy like Coach Bostwick as a mentor when my running was developing was essential though. Honestly, he has been the biggest influence in this sport and greatest motivator I've ever had. More than anything else, he made us believe that we could be state champions back in high school, and the lessons he taught us and advice he gave us I will never forget. At this level, when things get really tough I still hear him telling me 'don't give up' or that 'it's not complicated.'"

Freriks also relishes being part of a program where he can train daily with national and world-caliber runners. "Having teammates like Dave, Diego and Ahmed, or Jordan and Ben for that matter, has been awesome. Dave is one of the most humble and down-to-earth guys you'll meet in this sport and he happens to also be one of the best in the NCAA at the moment. Their work ethic is second to none, and it's been amazing to be a part of a team with such elite-level athletes as themselves. They all bring something to the table: Diego can awe all of us with some of his ridiculously tough workouts and being one of the toughest runners I've met. Dave has a ton of experience and trains smart, and Ahmed is always doing all of the little things - hurdle drills, form drills, stuff with the med balls. I think you can take a ton away from guys like these and I think the rest of us definitely use them as a model for our training."

According to Coach Heins, Freriks is exactly where he belongs running alongside such elite athletes. "Tim is an interesting case. He hadn't run blazing times in high school and then he comes along and runs an 8:58. We were all asking where the heck did this kid come from. He was right in our backyard. He ran so well on the national stage in high school, it's not a surprise to see him doing so well now."