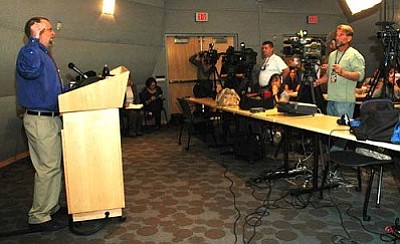 State Health Director Will Humble details Monday what has to happen now that voters have approved a medical marijuana law before patients will actually be able to buy some from a state-approved dispensary. (Capitol Media Services photo by Howard Fischer)

PHOENIX -- Would-be patients hoping to get some medical marijuana now that voters have approved the law should not hold their breath.

State Health Director Will Humble said Monday Proposition 203 gives his agency 120 days from the time the election results are certified -- now set for Nov. 29 -- to come up with the rules and regulations of how the system will operate.

Theoretically, he said, that should allow doctors to begin writing the legally required recommendations for patients in early April. But Humble said they may not have any place to purchase their drugs, at least not legally.

At the end of that 120 days, Humble said his agency has to start reviewing what he expects to be hundreds of applications by groups which want to operate one or more of the marijuana dispensaries around the state. And, by law, he's currently allowed to give permits to only 125 of them.

Humble said he probably will screen each of the applications to check their plans for operations and security and award the licenses to only the most qualified. The alternative, he said, is a simple lottery process, something he does not favor.

Even that, however, doesn't get the process started: He said each dispensary needs time to get up and running.

"And remember, they've got to get their cultivation facility up and running so they have an inventory that's legitimate,' he said.

"I don't want this to be inventory that comes off the street or from Mexico or something,' Humble said. "This has got to be from cultivation facilities inside the state.'

He figures it could be sometime next summer, if not the fall of 2011, before the plants are legally grown, harvested and ready for sale.

But Andrew Myers, the campaign manager for Proposition 203, said patients may not have to wait that long.

He said Proposition allows those who are at least 25 miles from a state-regulated dispensary to do their own cultivation.

"Patients will be given ID cards before dispensaries will be licensed,' he said. "So, at the outset, the first batch of patients are all going to be able to grow, for a year, until their renewal comes up.'

More complex, he said, will be everything else to make the system work.

Humble said there needs to be a secure computer system to track the drugs and the users.

On the front end, he said there needs to be an inventory system to ensure that everything that starts out as seeds in a legal cultivation facility winds up being sold through a legal dispensary, and only to a legitimate cardholder.

"That's not as simple as it might sound on the surface,' he said.

"When they grow the plants, they weight different amounts at different times,' Humble said.

"And there's a drying period,' he continued. "So part of that weight was water weight.'

He said dispensaries need round-the-clock access to the database of patients who have state-issued cards to verify that person is entitled to purchase marijuana. More to the point, the system will keep cardholders from buying more than 2 1/2 ounces every two weeks, the limit in the new law.

Finally, law enforcement needs the same access to determine if the person they stopped is entitled to have that bag of marijuana.

Of greater concern, Humble said, is keeping some doctors from becoming the kind of "recommendation mills' he said have popped up in Colorado. The health director said he wants to spell out what sort of doctor-patient relationship has to exist before a phyisician can write such a recommendation.

"If we have a loose interpretation of what a doctor-patient relationship is ... then you could end up with situations like they have in Colorado where folks are walking into a doctor's office for a 15-minute appointment and $150 bucks on the barrel head, they're walking away with a recommendation,' Humble said.

At the very least, Humble said he wants some assurance that doctors have discussed alternative to marijuana for their patients, particulary those who say they need the drug for "severe and chronic pain,' one of the conditions which lets a doctor write a recommendation. He said that should include biofeedback and acupuncture where there is peer-reviewed evidence both actually work.

"Chronic pain is very difficult to measure,' Humble said, which is one reason he opposed the initiative in the first place. And that, he said, provides an opportunity for abuse.

In Colorado, he said, more than 90 percent of cardholders get them for chronic pain.

"The majority of those cardholders are guys in their 20s and 30s,' Humble said.

"I'm not saying none of them are in chronic pain,' he continued. But Humble said that condition becomes a "gateway' into Colorado's system.

"I want to make sure we have some checks and balances in the system ... to make sure they are in a true doctor relationship, that they've truly evaulated that patient, that they truly think marijuana is the mechanism that they want to use for managing that patient, and they've talked with that patient about the various alternative treatments that they may have access to,' he said.

Q: When will patients who have a qualifying medical condition be able to get the necessary ID cards allowing them to possess marijuana?

A: Probably in early April, after the state issues the rules that doctors have to follow, and sets up the tracking system.

Q: When will they be able to buy marijuana from a state-regulated dispensary?

A: Humble said that system won't be in place until next summer or fall.

Q: What about growing your own?

A: The law allows that for those at least 25 miles from any dispensary. People anywhere in Arizona who get their cards before there are any dispensaries may also qualify.

Q: What will be tracked?

A: The state will have a database of every cultivation facility, every dispensary and every person who is issued a card by the Department of Health Services.

A: Dispensaries will be able to get real-time verification that someone has a card. And law enforcement will be able to link to a state computer to determine if someone they stop is legally allowed to possess marijuana.

Q: Will that information be public?

A: No, though Humble said the U.S. Drug Enforcement agency probably could subpoena the records if it wanted, as federal law still makes possession and sale of marijuana illegal.

Q: What about driving?

A: The law still makes it illegal to drive under the influence, though Humble said it will be up to law enforcement to determine exactly what that constitutes. There is no test similar to alcohol to determine a specific level of impairment.

Q: What about on-the-job drug testing?

A: Anyone with a state-issued card cannot be fired or disciplined solely because a drug test turns up positive for marijuana. That, however, does not cover those who smoke on the job or are impaired.

Q: Where can people smoke?

A: Humble said the law prohibits smoking in "public places,' but does not define that. As a starting point, Humble said he will use the tobacco laws, meaning no bars, restaurants and other enclosed public places. Not yet decided is whether smoking marijuana will be allowed in public places outdoors like parks.

Q: What kind of doctors will be allowed to write recommendations?

A: The law limits it to medical doctors, osteopaths, homeopaths and naturopaths.

Q: Will there be oversight of doctors?

A: Humble said he wants rules that define a doctor-patient relationship so physicians don't just go in the business of writing recommendations for anyone who comes in the door.

Q: Can a dispensary have a doctor on site or on staff to write a recommendation?

A: There is no prohibition to that in the law. But Humble said the rules about relationships should prevent abuse.

Q: How many dispensaries will be established?

A: The law allows one for every 10 pharmacies, which Humble figures now computes out to about 125, with a require for at least one dispensary in each county.

Q: Can pharmacies sell the drug?

A: Humble said if they meet the other requirements of Proposition 203 they can be licensed as a dispensary. But being a pharmacy, by itself, does not qualify.

Q: What keeps cultivation facilities from selling some product off the books?

A: Humble said he wants some way to track plants from seed through cultivation, drying, transfer to a dispensary and, ultimately, sale.

Q: Will card holders from other states be able to purchase marijuana in Arizona?

A: Humble said that is still being researched.