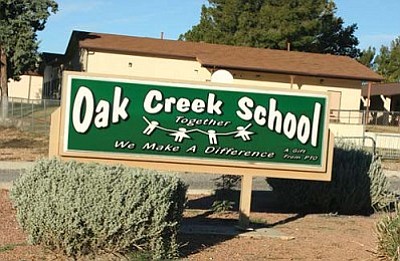 CORNVILLE - Whatever happens at Oak Creek School - or elsewhere in Cottonwood-Oak Creek School District - will be driven almost entirely by expected deep cuts to funding in Arizona education. Making financial matters worse, C-OC has lost 175 students since last school year, also cutting into the district's budgets for the next few years.

District Superintendent Barbara U'Ren told a group of parents during a public meeting at Oak Creek School Monday evening that budget projections are "dire for the four years."

U'Ren held the meeting in response to rumors circulating that the C-OC Governing Board has made the decision to close OCS so it can open an International Baccalaureate program on the campus. The rumors began circulating after the board held a study session Nov. 9 prior to its scheduled meeting.

"No decisions have been made," U'Ren told the crowd of about 80 people. "It was a study session."

She said that the only action taken so far by the board was to instruct the administration to look at OCS for possible placement of an IB program. She also said the board is considering other options, all having to do with shifting students from school to school within the district, or possibly restructuring or even closing a campus.

U'Ren told The Verde Independent late last week that the board is studying all five campuses and evaluating their cost efficiencies compared with student populations. "As we are faced with budget reductions of 25 percent or more over the next three years, it is clear that Oak Creek School cannot continue to operate or be staffed as it has in the past," U'Ren said.

U'Ren said that if the board decides to place an I.B. program at OCS, the school's structure would be replaced. In that event, parents would have the option of having their children attend the IB school or being transported to another school within the district.

The board will hold a public meeting before any decision is made, U'Ren said. Before a school district can actually close a school, state law requires that a certain process be followed, including letters of notification to everyone affected and a public meeting.