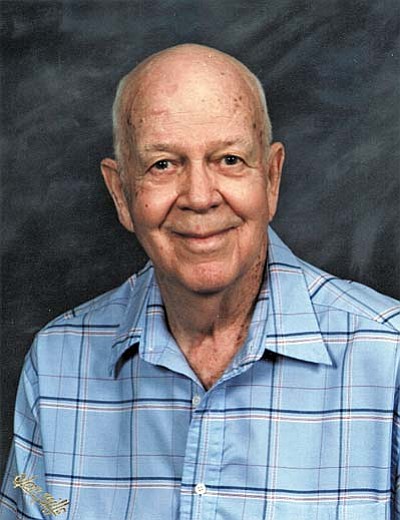 Dick Nichols, 86, passed away on November 12, 2010, in Cottonwood, Arizona. He graduated in June 1942, (Polytechnic High School in Ft. Worth, TX) and enrolled in a college level drafting course sponsored by the Defense Department. After completing that course, he landed a job with the Civil Aeronautics Administration as a Junior Draftsman at fifty cents per hour. He drafted plans for airfields and was very happy at that job.

On January 9, 1942, he boarded a train in Fort Worth bound for boot camp in Norfolk, Virginia (US Naval Construction Battalion). He served in Dutch Harbor Alaska and in the South Pacific. He was discharged from the US Navy in January 30, 1946.

Dick moved to Glendale, AZ in 1946, and began his career at the Salt River Project October 17, 1947, as a Junior Draftsman. Due to a re-structuring of the organization in 1950, he was promoted to Chief Draftsman. His primary work was serving the Civil Engineering Department and developing a mapping system for the Water Service Department. His last ten years were spent developing a computer graphics system that would include both the water and electrical distribution systems of the Salt River Project. On February 28, 1987, after thirty-nine and one half years, Dick retired. His department had grown to over one hundred and sixty employees.

He moved to Cottonwood, AZ. in 1999, becoming a member of the Verde Valley Christian Church.

One grandson and one great grandson have preceded him into eternity.