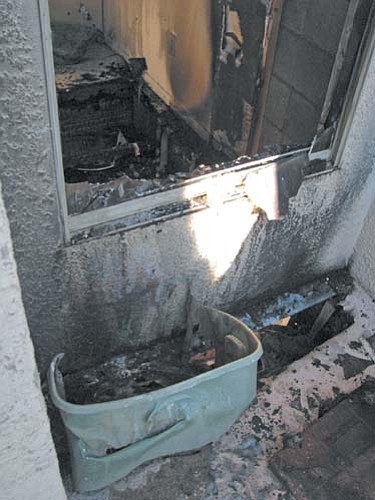 COTTONWOOD - Improper disposal of fireplace ashes may have contributed to a house fire in the Sawmill Gardens Patio Homes off Cottonwood Street.

Shortly after 7 Monday morning, crews from Verde Valley Fire and Cottonwood Fire were dispatched to smoke showing in a unoccupied patio home. Capt. Larry Dawson's crew from CFD arrived first, confirming smoke from the second story vents of a duplex located at 520 Mill Drive. Crews found substantial smoke and heat with some fire, mostly within the wall and floors. The agencies worked together to knock down the fire.

Neighbors said the unit was occupied last weekend, and they saw occupants tending some sort of an outdoor fire. There was a chimenea on the second floor outdoor porch area.

Fire investigators believe the fire had smoldered for a long time, with enough heat to actually melt smoke alarms, and burn through the floor joists of the second floor. Enough floor joists were burned that a metal file cabinet fell through the floor into the garage. An area was burned around a melted plastic bucket with ash residue on the outside upper porch. There was extensive charring along that same interior wall, and framing. Crews used thermal imaging cameras and found no further extensions, but, according to Verde Valley Fire Chief Jerry Doerksen, the unit will be closely monitored for any possible rekindling.

According to a next-door neighbor, she woke when her carbon monoxide detector sounded. She saw the smoke, called 911 and then got out of her home. Firefighters removed the woman's cat, but her unit did not sustain damage. The fire is under investigation to determine the actual cause.

In addition to working fire crews, Verde Valley Ambulance was on scene to offer rehabilitation support.