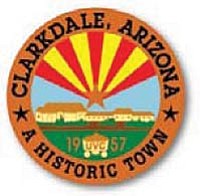 CLARKDALE - Mayor Doug Von Gausig received a letter this week from Freeport-McMoRan Gold and Copper declining a January proposal from the Clarkdale Sustainability Park regarding the land known as the Verde Valley Ranch. The 977-acre parcel was one of three sites identified by the town council as being suitable for the Sustainability Park.

The proposal from Clarkdale to Freeport requested that the company donate the land in and around Peck's Lake to the Clarkdale Sustainability Park.

Located in the northeast portion of Clarkdale, the site has an existing agreement for 900 homes and commercial development. About 200 acres was formerly a mining tailing site. That portion of the parcel was of interest to Clarkdale as a site for the Sustainability Park.

Joseph Brunner, Director of Discontinued Operations for Freeport, sent the letter to Von Gausig declining the proposal. "Freeport has had informal discussions with the U.S. Department of Interior and others who have suggested that an appropriate future use of this parcel is for public/recreational/habitat purposes, consistent with the characteristics of the Tuzigoot National Monument and the adjacent Tavasci Marsh," Brunner stated in his letter.

"Freeport has conducted a thorough review of potential opportunities associated with our Verde Valley holdings, including an evaluation of a variety of opportunities that align with both our Arizona business goals and our Sustainable Development Goals," Brunner's letter stated.

Town Manager Gayle Mabery said the town is disappointed that Freeport declined the offer. But she doesn't see it as any kind of set back for the project. "We believe their decision allows our investigation of all remaining options to continue with more clarity, which is in keeping with our commitment to allow this project to continually evolve," she said.

"We are pleased the area is now off the table," Davis said. "We have also felt it was much more valuable to Freeport for conservation collateral. The decision takes a lot of pressure off us. We still support the concept of the park and believe a more appropriate spot will be found."

Clarkdale Sustainability Park Project Manager, Jodie Filardo said that even though Freeport declined to move forward with the town's initial proposal, there continue to be a wide array of options available to the town, including additional discussions with the company.

"With the next step of the project involving funding for the feasibility study, the town will continue to evaluate sites to create the best fit with our vision," Filardo said.

Two of the three sites originally identified by the council are still in play.

One of those is a 594-acre parcel owned by the Clarkdale Metals Corporation. It is located in the northern portion of Clarkdale with 400 acres just outside the town.

The second site is a 522-acre parcel owned by Verde Exploration. This parcel is entirely outside of town. It has access off SR 89A.

"The town has spoken with representatives of each of the other two sites," Filardo said. "And each is aware they are under consideration as a possible site."