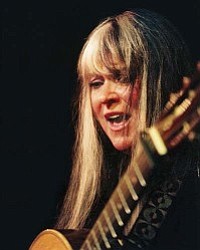 For more than 40 years, Melanie has been writing and singing her songs for the world. Through all that time, she has been true to her own creative musings, never allowing herself to be pigeonholed by record labels into a genre or style that did not come from within.

At age 4, Melanie performed in public for the first time on a radio show. She and her mother performed together on "Live Like a Millionaire."

"My mother was a jazz singer," Melanie said. "She fantasized that I was the next Shirley Temple."

Toward that end, Melanie's mother got her into performance lessons, including tap dancing.

But she was very definitely gifted.

Melanie and her mother won runner-up on that show, and Melanie won a Tiny Tears Doll. "I thought if I can sing and win dolls this is a good life," she said.

Melanie grew up in New York City and went to high school in New Jersey. It was during those years that she was already developing a style that would set her apart from the crowd for the rest of her career.

"I learned to play the ukulele at 4," Melanie said. "Then I got a baritone ukulele because it didn't sound so Author Godfrey."

At 15, Melanie's father got her a guitar. "I was totally self-taught," she said. "I'd go to the Village on weekends and people would teach you things."

She said she was embarrassed to play in clubs and pass around a donation basket. "I played on the street corners," she said. "I just walked barefoot around Greenwich Village with my guitar strapped to my back."

During her high school years Melanie began to understand that she didn't see the world - or herself - in the same way others did.

"I thought I invented the '60s," she said. She thought she was the only oddball, mostly because of how she dressed.

"I was always sent to the principal's office for the way I was dressed," Melanie said. "Everything I did was against the code of dress. I didn't set out to be disruptive. I truly wanted to be the fantasy of who I was."

At one point, Melanie ran away from home. "I had all kinds of adventures," she said.

But the adventure ended with Melanie being held in a detention home while her parents came to retrieve her. "I kept fantasizing that this would make a really good song," she said. "But I was too afraid to write it."

It was Woodstock that thrust Melanie onto the world's musical stage. At 11 p.m. on the first night of the concert, after the Nitty Gritty Dirt Band declined to perform in the rain, Melanie walked on stage, just her and her guitar. "I was completely unknown at Woodstock," she said. "I walked off the stage a celebrity."

Something else happened while Melanie was on stage at Woodstock that is still embedded in the world's collective consciousness. While she was performing - and for the first time that anyone can recall - people in the audience began holding up points of light: matches, lighters, candles.

Over the years, Melanie has been called "the original flower child." She doesn't argue that the title fits, but she wasn't happy how it originally came about. "I hated that," she said. "It was the early days of marketing, and they wanted to pigeonhole you."

She wasn't about to be characterized by a record label - not then, not now. "I was really a folk singer, although I wrote my own songs," she said. "They just didn't know what to call me."

She says the look was folk. "But I always felt like I was a real singer." What she was, was one of the original singers and songwriters, a description she likes much better than the current "singer/songwriter" description. She says her music was "all over the place," and could not easily be locked down in a musical genre.

"It was a time when people were experimenting," she said. "It was a near Renaissance."

She sums up what she's been doing all these years by simply saying she has been performing nonstop. "I never retired. I never left the planet. I've just been doing it."

And she is still doing it.

Melanie will soon release her new album, Ever Since You've Never Heard of Me. She says that album title comes from the fact that when she is introduced, she occasionally needs a little explanation.

Even though she has played with some of the biggest names ever in rock 'n' roll, and played in the most prestigious venues, such as Carnegie Hall, the Metropolitan Opera House, the Sydney Opera House and London's Royal Albert Hall, sometimes it isn't until her most memorable hits are mentioned - Candles In the Rain, What Have They Done to My Song, Beautiful People, and especially, Brand New Key -- that people say, "Oh, that Melanie."

Brand New Key sold more than 3 million copies worldwide. That song, along with Ring the Living Bell and The Nickel Song were all on the Top 40 Hits chart at the same time, winning Melanie the honor of being the first female performer to have three Top 40 hits concurrently.

About two weeks before this interview with Melanie, her husband and manager for 44 years, Peter Schekeryk, died suddenly in a Best Buy store while he and Melanie were on tour. The couple has three children, Leilah, Jeordie and Beau-Jarred. With only one exception, Peter produced all of Melanie's albums.

She said Peter was her manager, her husband and her best friend.

The employees of Best Buy told Melanie that Peter's last words were about her. "She started the lighting of things," he told them moments before he passed away.

A couple of days after Peter's death, Melanie played to a sell out audience. She said she has continued performing because it is exactly what Peter would want. "Our life was on the road," she said.

But it hasn't been easy. "I'm amazed I can do it," Melanie said.

"The concerts I've done since have been magical," she said. "I know he's there."