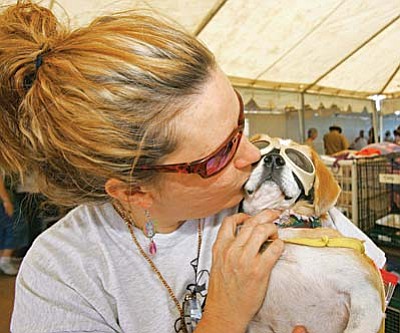 Last year about 90 dogs and cats were adopted. The most successful single day for Pet-A-Palooza in the Verde Valley sent 152 animals to new homes.

COTTONWOOD - "Homeless animals are victims of this recession," said Joe Sowerby, founder of the Pet-A-Palooza adoption event. "I see it every day."

Sowerby said dogs and cats don't understand what's happening, and they cannot do the math. "Some of us can adjust our lifestyle," he said. "But homeless animals are at risk of having no life at all."

He said that nationwide, euthanasia rates are up due to the economy. He said that we've always known that animals are humans' best friends. Now we have an opportunity to show that we can be best friends to these deserving animals.

"They are in jail for no crime other than being homeless," Sowerby said. "They just don't have any place to go."

Sowerby said that when someone adopts an animal they are opening a space at a shelter. "When you adopt an animal, you're giving two animals a chance at life."

For that act of kindness of adopting a homeless animal, people get unconditional love for a little food, a bowl of water and a scratch behind the ear. "I'd call that a bargain by anybody's standards," Sowerby said.

This year's Pet-A-Palooza will be held for the second time at the Children's Park on the Verde Valley Fairgrounds on 12th Street in Cottonwood. The Oct. 9 event opens at 10 a.m. and closes at 4 p.m. Last year about 90 dogs and cats were adopted. The most successful single day for Pet-A-Palooza in the Verde Valley sent 152 animals to new homes.

"The shelters tell me they do as many in one day as they normally do in a month," Sowerby said. "I'd love to send home 100 this year."

Sowerby started Pet-A-Palooza in Michigan in 2002. That event has grown to be the second largest such event in the United States. He said the Michigan event has sent home as many as 578 animals.

This year Pet-A-Palooza in Cottonwood will have more than 150 homeless cats and dogs from humane shelters and rescue groups throughout Northern Arizona. The animals will be spayed and neutered and vet checked.

Puppies, kittens, young animals and mature animals will all be available. "We really put a focus on older animals," Sowerby said. "The older animals are far more at risk in the shelter. These animals are all stuck in these shelters in small cages. It's hard on them all. But it's especially hard on the large, older dogs."

Sowerby urges people who adopt animals to make a lifetime commitment - the lifetime of the animal. He, and every person who works in any of the animal rescue shelters, urge people who are pet owners to spay or neuter their animals. Adoption is critical to saving these deserving animals, but spaying and neutering is the solution to the problem. There simply aren't enough homes for all of the homeless animals.

"There is low-cost spay and neuter services through your humane society," Sowerby said.

Everyone connected with Pet-A-Palooza asks people to come out and take a look at the cats and dogs that are up for adoption. There will be a new best friend waiting for almost everyone.

"People can improve their own life by saving another life," Sowerby said.

These homeless animals don't have a voice. "We are the only voice they have."