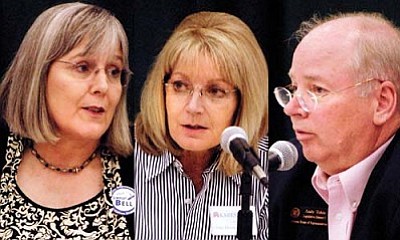 Two Republicans and one Democrat are competing for the two legislative seats representing District 1. Insurance agent and incumbent Andy Tobin is joined by businesswoman Karen Fann as the GOP nominees. Fann has been a council member in Chino Valley and Prescott.

Democrat Lindsay Bell, with a Master's degree in Public Administration, is retired from years working in nonprofit agencies. She has been a member of the Prescott City Council.

What is your concept of immigration reform?

Karen Fann: First of all, I am an avid supporter of 1070. I do believe in our border security and security of our nation. 9-11 was not so far that we should forget. This is not about our Hispanic neighbors to the south. This is about border security and securing Arizona, from the terrorists and the drug smugglers, from people who would come her to do us some harm. When it comes to reform, we have a legal system for people to come in. Anything other than legal immigration is why we call it illegal. They have broken our laws and come here without permission. They have come here without the legal right to be here. They need to go back home and apply for a work visa or citizenship and you need to go through the procedures just like everyone else. Why should they be able to jump ahead of anyone who has applied legally, just because they broke our laws? Follow our rules, and at some point, if the voters want to change the rules, so be it.

Lindsay Bell: We are all frustrated at the lack of effective movement on immigration reform by the U.S. Congress, even though members of both parties attempted to move it forward. Arizona needs to continue pushing for comprehensive immigration reform at the federal level. A coalition of Arizona business groups did just that recently by publishing a set of suggested reforms. Immigration reform needs to strengthen border security manpower and surveillance. A workable guest worker program. A better process for legal immigration that is affordable and timely. For those not here legally, but want legal status, they must pay a fine, prove a clean record and go to the back of the line.

Arizona needs to cooperate with the federal enforcement of immigration and work together rather than getting in the other's way. We have to crack down on criminal cartels that engage in human smuggling and rug smuggling. It is best to go after the money and cut off profits to cartels.

Andy Tobin: Securing the border is the political lynchpoint that allows us to go into reform on immigration. If it is not done, it is not going to happen. I would say to you that doing what we did -- and Janet Napolitano signed on and Ann Kirkpatrick signed on - with the eVerify system, requiring employers to verify residency. That was OK two years ago, but the Obama administration has decided to challenge this in court in November. Now we have to find some of those legal dollars to protect the border. You can't address illegal immigration without addressing the border. We have coyotes bringing these people and their families across the border. We have our neighbors down on the border who are being evacuated from their homes and are being shot at. We can't go there without sealing the border. We have secured borders before and we can do it again.

How can we revitalize the economy and balance the budget

Lindsay Bell: We need to revitalize the economy and fix Arizona's tax code in order to balance the budget. The first step is to diversify the economy and stop relying to heavily on sectors such as housing construction, so vulnerable during an economic downturn.

We should 1) put a hold on further tax cuts and until we can review the tax code. Except for one year, we have cut taxes every year since 1989 to stimulate the economy and create jobs. These actions added to our current and projected budget deficit and were not successful in stimulating the economy. 2) we need to review all tax credits and tax exemptions (about 200 of each) for possible elimination. 3) Identify and close tax loopholes. 4) Look for ways to get more bang out of every tax dollar spent and 5) Make existing resources go farther.

Karen Fann: One of the only ways we can revitalize the economy is to bring in private money to match with public money. We just don't have the money to do those sorts of things. So the first thing is to bring in private money to match to make these dollar stretch farther. But, once we get private money coming in, we need to make sure that they stay here. We need to make sure that Arizona is a state where people want to do business. We need to have a better tax structure. Arizona has one of the largest business taxes in the United States right now. I think we need to be more business-friendly here. Another thing that we have here is what is called business-personal property tax. Every time I buy a new truck for my business, I pay the vehicle license tax and I pay all the fees and then every year, I have to pay tax on that equipment again in the form of personal property tax. The taxes are ridiculous and Arizona is the worst and is why a lot of businesses don't want to come here.

Andy Tobin: I have a plan to create jobs. Arizona's tax structure is not competitive and it discourages new businesses from coming here. Our corporate income tax rates and business personal property tax rates are too high.

My plan to reduce those taxes wouldn't take effect until the state's temporary sales tax increase starts going away. My plan would reduce state revenues by $38 million annually, but only if you assume it wouldn't create new jobs.

My plan would eliminate the corporate income tax over seven years, after businesses invest $500 million on new infrastructure. It would expand enterprise zones, which would be great for rural areas. It would offer job training for new employees, and the cost would be covered by increases in tax revenues generated by the new employees.

Lindsay Bell: I would vote no on both Props 301 and 302. The land conservation fund was established by voter initiative to help municipalities and local governments purchase land for conservation and preservation.

Prop 302 helps Arizona's youngest children have a healthy start in life and prepares them for success in school. It is funded by a dedicated tax on cigarettes, approved overwhelmingly by voters.

Karen Fann: I support the passage of both 301 and 302. Too much money has already been spent based on the needs. $324,000,000 would be returned to the General Fund. There are 47,000 kids on Kidscare. Growing Smarter did not work well. It was a great idea collecting dust.

Andy Tobin: There's still a lot of work to do. The budget's in real trouble. We can always cut more, but I'd like to reverse some cuts in public safety, high schools with job training and adult education.

The state could privatize some services such as interstate rest areas, state parks, jails and health care.