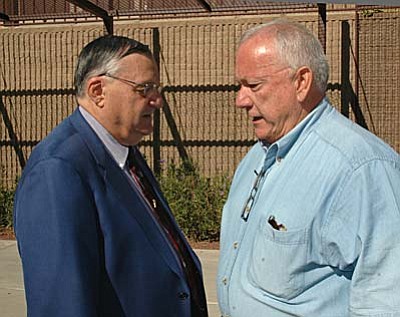 Maricopa County Sheriff Joe Arpaio answers questions Thursday about the lawsuit failed agianst him and his agency by the U.S. Department of Justice for failing to produce documents they requested while investigating possible civil rights violations. (Capitol Media Services photo by Howard Fischer)

PHOENIX -- Saying their time and patience has run out, attorneys for the U.S Department of Justice sue Maricopa County Sheriff Joe Arpaio Thursday for refusing to provide them with documents they want for their civil rights investigation.

The lawsuit, filed in federal court here, says the agency began a preliminary inquiry of the sheriff's department in 2008 amid allegations that employees have been "engaged in a pattern or practice of discriminatory law enforcement conduct,' both on the streets and in the jails.

A letter last month to Arpaio, obtained by Capitol Media Services, said the feds specifically are looking into allegations of unlawful search and seizures, discriminatory police conduct, and the failure to provide basic services to people with limited English-language skills. All that is related to questions of disparate treatment of people based on their national origin.

Thursday's lawsuit is the second within two months filed by the Justice Department in Arizona over issues related to race and discrimination.

It sued the state in January over provisions of a new immigration law approved by the Legislature and signed by Gov. Jan Brewer. A federal judge, after hearing arguments, barred several provisions but let other sections take effect as scheduled July 29.

This lawsuit relates to requests the Department of Justice says it began making in March 2009.

To date, according to lawyers for the agency's civil rights division, Arpaio and his department have failed to fully comply with the request. In fact, the lawsuit says, the sheriff's office sent a letter last week saying "it would not cooperate in full with the investigation.'

The lawsuit asks a federal judge to compel Arpaio and his administration to produce the documents already sought "and all future requests.'

Arpaio said he was surprised by the lawsuit.

"They have hundreds and thousands of our reports,' he said. "We thought we were getting along fine.'

But Arpaio conceded that he hasn't give the Justice Department everything, calling its request "so broad.'

"I'm very confident that my deputies do not racial profile,' Arpaio said.

"They know it,' he continued of the Justice Department. "They can't get the proof. So now they're suing me, just for documents.'

Neither the feds nor Arpaio would spell out what papers are being sought that have not been disclosed.

To get those grants, the lawsuit says, representatives of the sheriff's office, including Arpaio, signed contracts agreeing to comply with the Civil Rights Act.

"These requirements including providing DoJ with access to and the right to examine records and other sources of information,' the attorneys wrote. But efforts during the last year have come up short, the lawsuit states, with the agency providing only some of what was sought.

"The actions of the sheriff's office are unprecedented,' said Thomas Perez, the assistant attorney general for the Civil Rights Division in a prepared statement. "It is unfortunate that the department was forced to resort to litigation to gain access to public documents and facilities.'

Arpaio said he is willing to cooperate -- up to a point.

"I think we would be willing to turn over what pertains to the so-called racial profiling, not many, many other things they want,' he said. For example, he said what goes on in his jails has "nothing to do with it.

But the lawsuit specifically says the Department of Justice is investigating discrimination in "police practices and jail operations.'

That letter last week the Justice Department portrays as Arpaio's final refusal to cooperate is a bit more ambiguous.

In a five-page response to the feds, Robert Driscoll, Arpaio's lawyer, lays out what he says are legitimate legal questions to what the feds are seeking. And he said there are limits.

"DoJ's current position -- that it is entitled to any document it wants, to access any facility it wishes, and to interview any witness it wants, without limitation, merely because it is undertaking a (Civil Rights Act) review related to alleged national origin discrimination -- is simply unreasonable,' he wrote.

Arpaio has gained national attention with his practice of "crime suppression sweeps,' where deputies converge on a neighborhood and stop people for any minor violations. Arpaio has made it clear one purpose is to then let his deputies inquire about whether those stopped are in this country legally.

Most of those "sweeps' have been in areas of Maricopa County with a high percentage of Hispanics.

But the Department of Justice, in its press release, said it cannot cite any other incident in the last 30 years where a police department or sheriff's office has refused to cooperate in an inquiry like this.