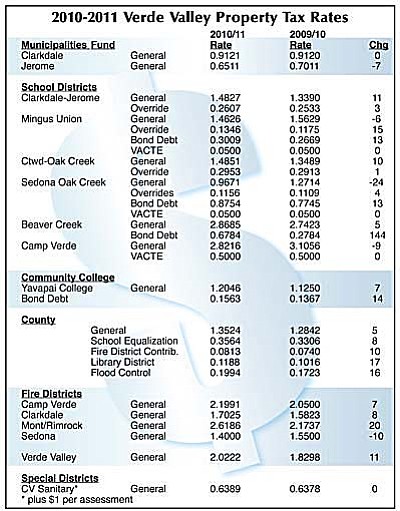 YAVAPAI COUNTY - Within the next few weeks, property owners in Yavapai County will be receiving their 2010 property tax bills.

And, for the first time in years, if ever, many will see a reduction in their assessed valuation -- a reflection of the state's declining real estate market.

According to the Yavapai County Assessor's Office, assessed valuations on real property fell an average of 11 percent across the county between 2009 and 2010.

In addition, property owners receiving their Notice of Valuation for the 2011 tax year are seeing further a reduction in value for the next year. On average home values will drop another 18 percent in 2011.

Many would consider such a lower valuation a pleasant break after years of escalating taxes and home value. But just as many will discover, lower valuations do not necessarily translate into lower property taxes.

"The role of property valuation is to determine how the dollar amount needed to operate each agency is divided among neighbors. If your value goes up and your neighbor's goes down, you are going to pay more of the taxing entity's budget," said Julie Ayers, administrator for Yavapai County.

"If your valuation goes down proportionally with the rest of the property owners in a district, and the amount levied by the taxing district stays the same, your tax will remain the same," she added.

Ayers pointed out that the only time your tax bill would drop would be if the taxing district lowers its levy or if the value of your property declines disproportionately to other property owners in a specific district.

"It's a three-part formula. The assessor provides the value, the taxing entity provides the levy, and the rate is just a function of those other two numbers," she said.

The dramatic and previously unheard of declines in property values have, however, presented some problems, some perceived, some real, for local taxing authorities.

As an example, this year Yavapai County's general tax rate increased 7 percent. But the county did not need to hold a Truth in Taxation hearing because their levy is the same as it was last year.

"From the perspective of the Arizona Constitution, we did not increase property taxes. The rate makes it look like we did because values dropped, but we didn't," Ayers said.

Some fire districts, because of a new state law, are being particularly hit hard by the reduced valuations.

The new law puts a limit of 8 percent per year increase on fire district levies for the next two years, and a cap of 3.25 percent on the rate for fire districts from now on.

"The law could make for the perfect storm, especially in a growing district like ours," said Jack Blum, business manager for the Camp Verde Fire District. "Next year will be a biggie for us. The valuation of the district will drop by 17 percent in 2011. We are really going to get hit hard."

Blum noted that the Camp Verde Fire District, which saw an increase of 7 percent in calls last year, is fortunate because only half its revenue comes from property taxes.

"Half is good. Most districts depend almost entirely on property taxes. But we have an ambulance service and a contract with the Yavapai-Apache Nation. Before we had those, property taxes were 91 percent of our income. It's never good to have all your eggs in one basket." Blum said.

Clarkdale, which is one of two municipalities in the valley with a property tax, was able to keep its rate flat this year because some commercial properties offset the drop in residential values.

"Clarkdale Metals Company, because of their improvements, offset a lot of the declines we saw across the board," Town Manger Gayle Mabery said.

Only about 15 percent of Clarkdale's annual revenues come from the property tax.

"It has been a point of discussion in our budget sessions that several funding sources are going to be at play over the next few years, and a continued decline in property tax revenue is one of them,' Mabery said.

The county assessor's office has recently posted some educational videos on its Website to help explain the relationship between levies, valuations and rates. Follow the link under News and Events at http://www.co.yavapai.az.us.