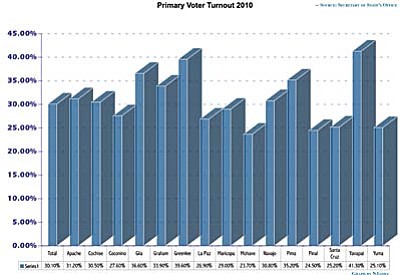 PHOENIX -- Maybe it was a few hotly contested elections.

Or just anger with government.

But a higher percentage of Arizonans turned out to vote in the primary than have in two decades.

Figures from the Secretary of State's Office show 933,650 people cast ballots in the race. That translates to a turnout of 30.1 percent.

Two years ago only 22.8 percent of registered voters turned out. And two years before that -- when, as now, most statewide offices are up for grabs -- the turn out was just 24.7 percent.

In fact, the last time primary turnout was this high was in 1990 when more than 41 percent of those registered cast ballots. That year featured a five-way Republican gubernatorial primary that nominated Fife Symington and a two-horse Democratic race that resulted in the nomination of Terry Goddard.

Symington eventually won in the state's first and only runoff.

While this year's turnout falls far short of that 1990 figure, Secretary of State Ken Bennett said some factors helped boost it over what it has been.

"You had some key contested races,' he said. "You had a lot of excitement with just general dissatisfaction, the 'tea party' groups.'

Bennett said there also was "a lot of talk about how the balance of power in Congress could turn on just a few votes.' And several of the congressional seats in Arizona could be up for grabs in November.

Four of the five highest-turnout counties -- Yavapai, Greenlee, Gila and Graham -- are in Congressional District 1.

Incumbent first-term Democrat Ann Kirkpatrick had no opposition. But eight Republicans battled it out, with Paul Gosar getting the party's nod.

Bennett said about two-thirds of those who voted cast "early' ballots, either mailing them back ahead of election day or bringing them to the polls on Aug. 24.

The turnout is actually higher than the 20-25 percent range Bennett had predicted before the Aug. 24 vote. Bennett said that bad guess is not his fault.

"Most of the counties were expecting in the 20-25 (range),' he said. "We figured that they knew what was going to happen.'

Bennett said he cannot say which party had the highest turnout.

The problem is that Arizona law allows voters not registered with any recognized party to cast a ballot in the Republican, Democratic or Green Party primary. The Arizona Libertarian Party successfully sued several years ago to keep independents out of their race.

Bennett said it will take some time to separate out the independent votes to see how many of the faithful of the recognized parties either went to the polls or cast early ballots.

The closest race was the Republican contest for attorney general, with Tom Horne edging out Andrew Thomas by 809 votes. That amounts to less than one-half vote out of each of the 2,239 polling places.