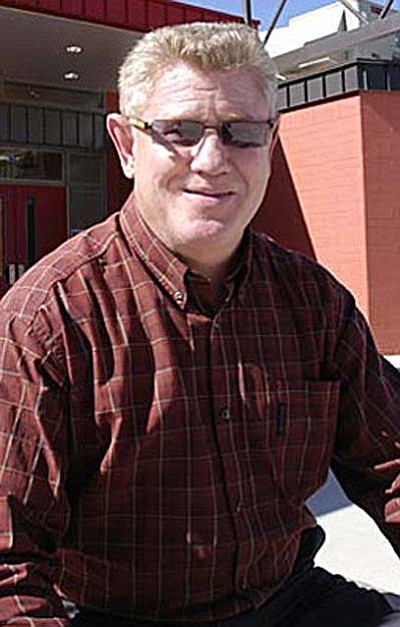 COTTONWOOD - The Mingus Union School Board voted 3-2 Thursday night to deny Superintendent Tim Foist's request to retire. It was the second time in little more than two months that Foist has threatened to step down from his position.

At the beginning of discussion, Ledbetter told the board he had received a letter of support for Foist from City of Cottonwood officials, including Mayor Diane Joens. He did not have a copy of the letter.

Ledbetter then made a motion to reject Foist's request, which was termed a "retirement" on the agenda.

During discussion for the motion, Ledbetter said the board should go through an evaluation process to address concerns with Foist.

When it was his turn to speak, board member Mike Mulcaire said he prefers to speak on the issues during public meetings instead of in the newspaper.

In a Verde Independent story about Foist's resignation, Foist said he was not getting along with Mulcaire. "But that is more about CTE and time on task," Foist said.

"To have this blasted on the front page of the newspaper," Mulcaire said, "is insubordination as far as I'm concerned."

Mulcaire said that several times he asked for relevant items to be placed on board meeting agendas, but the requests were rejected by both Tavasci and Foist. "I followed proper procedure," Mulcaire said.

Tavasci said on at least one of Mulcaire's requests, he was waiting to hear from the board's attorney.

Mulcaire said that Foist had tendered his resignation in July and then changed his mind.

Foist said that when the board asked him to work with Cottonwood-Oak Creek School District on saving money through shared services, "I offered my resignation." He said he refused to do so because he wants nothing to do with consolidation.

Board member Andy Groseta said the board wasn't at the meeting to evaluate the superintendent. He said he has concerns when an employee tenders a resignation, then pulls it back, then tenders it again.

Groseta said there are reasons behind all of this that the public doesn't know.

"There is a great need for us to have some stability at Mingus," Groseta said. But he added that when a superintendent offers his resignation twice the board should take it seriously.

Tavasci said, "Mr. Foist has followed every directive the board has given him."

Mulcaire disagreed and pointed out that the board had given Foist a directive to give the board a report that was done by former interim superintendent Dr. Nancy Alexander. That was three months ago and we still don't have it, Mulcaire said.

During a March 3 joint school board meeting on unification between MUHS and C-OC boards, the members and administrators were trying to develop a detailed structure for leadership of the unified school district.

Both boards and both superintendents were in attendance and accepted U'Ren's comments. No one, including Foist, objected or added any qualifications to the assessment.

But during another joint board meeting June 24, the Alexander third-party assessment was a major point of contention.

C-OC board president Randy Garrison said Alexander told the C-OC board she finished the interviews at Mingus but was told to stop.

MUHS board member Groseta asked if Alexander was told not to finish the Mingus side of the study.

Garrison said she was told not to finish.

"I thought it was finished," said Tavasci at the June meeting. He said he wanted to see it completed.

"That was the game plan and the instructions," said Groseta.

Foist was not present at the June meeting, but the MUHS board indicated that no one on the board was aware that Foist had decided to stop Alexander from completing the study.

During Thursday night's meeting, Foist said the Alexander study was never meant to be given to C-OC because the administrators had all been promised the information would be confidential.

If that was Foist's intention, he did not mention it during the March 3 meeting, and no one on his board or the C-OC board during the June meeting was aware of it. Both boards were expecting the third-party study to help them set up the administrative structure of the unified district.

Unification is on for MUHS and C-OC districts
Mingus School Board approves part time for Foist
Mingus board moves ahead on unification
Shared services for C-OC, Mingus back in play
Mingus board turns down consensus budget process