When aviation came to Cottonwood 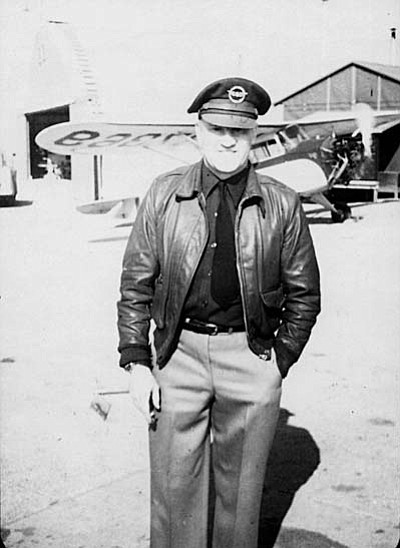 COTTONWOOD - We tend to take airports for granted today. But it takes a lot of work, money and ambition to make it happen. This year, as the Airport holds its second Airfest in October, the Cottonwood airport has an 81-year history thanks to many people with vision for taking to the skies.

The first airplane to fly over the Verde Valley was reported by the Jerome newspaper in 1917. Historians find that a barnstormer team later flew into the Verde Valley, landing near the old Cottonwood Cemetery, to sell airplane rides. It's those fleeting touches with aviation of which dreams are made.

Two Verde Valley men, Cottonwood Ford Motor dealer Ersel Garrison and Andrew Tipton, Clarkdale's postmaster and a former World War I pilot, were the champions of the first area airstrip. The pair established a strip on the east side of the Verde River about a mile up river from town and erected a small hangar there.

But the strip was on a hill and could not be lengthened to serve larger planes. That's eventually what area folks wanted to see as aviation grew in importance.

A Douglas competitor also helped the industry grow. William "Bill" Clark III of the United Verde Copper Company family was an air enthusiast and flew his personal plane out what was then called the Clemenceau airport.

Clark and airport manager Marcus Rawlins became friends and in 1932 formed a partnership to control the airport and form a corporation to operate the Verde Valley Airlines. But that dream was to end suddenly.

Famous pilot and instructor Jack Lynch was teaching Clark instrument or "blind flying" and the two were killed in July while Clark was learning. Clark's relatives and United Verde Copper immediately pulled out of the airport business.

The Clemenceau airport, however, did not really assume widespread importance for another decade, while the United States prepared for possible conflict in the Second World War.

According to a Clemenceau Airport's Flight through Time, by historian Nancy R. Smith, the airport garnered importance through the Civilian Flight Training program sponsored by the U.S. government between 1938-1944 to increase the number of civilian pilots and bolster military preparedness.

The government sponsored 50-hour training courses through approved flight schools, paid for by the government.

In 1940, the Civil Aeronautics Board, cooperating with representatives of the War and Navy departments, outlined an improvement plan for Arizona airports under the national defense program. Locals were frustrated because to obtain the money for improvement, the airport had to be controlled by a government and it was a privately held strip.

Nancy R. Smith writes that a number Cottonwood and Clemenceau residents organized and petitioned the Yavapai County Board of Supervisors to accept a deed of land from the United Verde Extension to establish a county airport. The board accepted the 144.6 acres for $10 and "other good and valuable considerations" June 3, 1940.

In addition the Supervisors established a board for control of the airport, naming E.H. Snyder, J.O. Braley, C.C. Stemmer, Karl Norton, Frank Edens, Bruno Valazza and Ersel Garrison. It was named the Clemenceau airport.

When Arizona Sen. Carl Hayden told Verde Valley businessmen that the government anticipated a 30,000 pilot goal by the pilot training, they saw an opportunity and began to look for an airport site that could handle planes larger than those at the Clemenceau airport.

Jack Frye, president of TWA and a Sedona resident, owned land east of Cottonwood near Highway 89A. He turned over enough land to accommodate two good-sized runways, and grading began in August 1941.

By September, Frye landed his personal twin-engine Lockheed Electra 10-E for the first time on what had become the Verde Valley Airport. An Army bomber made an emergency landing there in November.

So, it was a fluke that the airport eventually became home to a pilot flight school.

Oddly, the town of Williams did convince the Army that it had facilities to support training. Rue Marshall was the general manager of the Williams airfield, and the school was called the Williams Flying School.

But the pilot training was frustrated by the inclement winter months when Williams' weather was not suitable to training. The Williams air school was moved to Clemenceau.

Blue Interstates trainers were used for to train the civilian cadets.

Rue Marshall and Marcus Rawlins designed and built Quonset huts for the storage of planes and offices but shortly afterward, Rawlins left Clemenceau to work at the Prescott Airport, but Marshall went on to secure a Navy contract as well as the Army contract. The Navy provided Naval Aircraft Factory biplanes, the N3N, dubbed the Yellow Peril, as training craft.

One trainee was Robert M. Lamparter, who visited Cottonwood in 2007 and later penned his memories of the training for the Clemenceau Heritage Museum.

Lamparter says, "I tried to enlist in the Army, but they said I was color blind in 1942. Instead,I registered for the Civilian Pilot Training program and enlisted in the Army Reserve."

Lamparter was ordered to report to Clemenceau airport.

"There were about 30 of us, some Army and Navy, and were housed in the Clemenceau Women's Club, now the Cottonwood Civic Center. There were a couple rows of cots and the room in front was the office."

The Cottonwood Civic Center, build by the WPA in 1938, was leased to the Defense Department as a barracks for the Naval Air Cadet Flight Training Program and included a 100-bed dormitory.

"There were two dirt runways, one east-west and the other northwest-southeast. We flew side-by-side 60hp Taylorcraft Airplanes and I soloed after about 10 hours instruction," Lamparter says.

"There was one accident that I can recall and we painted a picture of a Gremlin for bad luck on the fuselage."

Lamparter says the cadets had ground school training to learn the rules of flying, why the airplane flies and the difference between ground speed and airspeed, the significant of reading and setting the gauges and some study on the weather.

"We had classes at night at the Clemenceau School building, marching up the hill on Willard Street, then a dirt seldom-used road. We had no transportation, except our feet, so we walked to classes and the airport."

In April 1945, Lamparter entered the Army's Aviation Cadet program and graduated as a pilot and 2nd lieutenant. He went into active service, assigned to an airfield in a dry lake bed in Baker, Calif., and later, Phoenix, living in the gym at Phoenix College and flying out of Sky Harbor.

Lamparter retired as a major after five years with duty in Korea and then 17 years in the Reserve.

By 1944, the Naval program had trained enough pilots that the Williams flight school at Clemenceau closed in 1945.

Rue Marshall was later appointed to a governor's committee to plan for expanded aviation in Arizona.

Marcus Rawlins returned to the Clemenceau Airport, now identified by the Cottonwood Progressive Association and the Cottonwood Chamber of Commerce as an asset for the community.