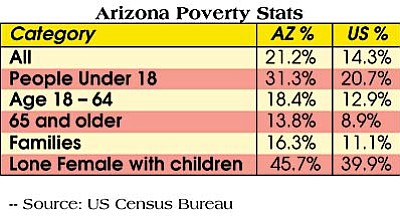 PHOENIX -- More than one out of five Arizonans live in poverty, a figure higher than anywhere else in the nation except for Mississippi.

New figures Thursday from the U.S. Census Bureau show nearly 1.4 million Arizonans who were in households earning less than the federal poverty level. That computes out to 21.2 percent.

By contrast, the national figure is approaching 43.6 million, just 14.3 percent.

That poverty level is based on family size. The Census Bureau uses a threshold for a family of four at $21,954, with smaller numbers for smaller families and bigger ones for larger clans.

The numbers include cash income but not one-time capital gains.

They also exclude government help like food stamps. That makes a difference: The Census Bureau figures that if the value of that aid were added to income figures, the number of people nationwide listed as living in poverty would be 3.6 million less.

The new reports shows that, even with a nationwide recession, there is an increasing disparity between Arizonans and those living everywhere else.

In 2007, for example, before the economy tanked, 13 other states had higher poverty rates than Arizona's 14.3 percent.

By 2008 the percentage of Arizonans living in poverty rose to 18 percent and only three states had higher numbers.

And the current 21.2 percent number -- second worst in the nation -- is approaching a level nearly 50 percent above the national average.

On a separate measurement, the Census Bureau also found that, despite the much higher poverty rate, the number of Arizonans without insurance is only slightly above the national average.

A total of 80.4 percent of Arizonans reported coverage, compared with 83.3 percent nationwide.

One likely reason for the lack of disparity is that Arizona has a more inclusive Medicaid program than most other states.

The Arizona Health Care Cost Containment System, the state's Medicaid program, provides free care for anyone in a family below the federal poverty level. And it has nearly free coverage for children in families where the earnings are twice that level.

Federal Medicaid regulations have much lower income limits, though states are free to set their own higher figures.

As a result, more than 20 percent of Arizona residents receive care through AHCCCS. The nationwide figure for Medicaid recipients is less than 16 percent.

A large number of Arizonans living in poverty are children.

The Census Bureau puts the poverty level of those younger than 18 at 31.3 percent, again, second only to Mississippi though tied with the District of Columbia. Nationally the poverty figure for children is 20.7 percent.

Even the elderly are affected: Among those 65 and older in Arizona, the Census Bureau finds 13.8 percent living below the poverty level. For the entire country the figure is 8.9 percent.

On a national basis, the Census Bureau reported the poverty rate in 2009 was the highest since 1994. But it was 8.1 percentage points lower than in 1959, the first year that such statistics are available.

In a prepared statement, President Obama said things could have been worse nationally.

"Because of the Recovery Act and many other programs providing tax relief and income support to a majority of working families -- and especially those most in need -- millions of Americans were kept out of poverty last year,' the statement said. And the president said that the new federal health insurance law will ensure that more families have coverage.

Paul Senseman, press aide to Gov. Jan Brewer, said the numbers "are no surprise to Arizona families who are struggling due to Arizona s economic over-reliance on many years of housing boom.' He said that is why she is pushing to create new jobs and why she supported the temporary sales tax hike to prevent further cuts to education.

Thursday's report does not break down the related issue of income on a state-by-state basis.

But a separate study done by the Bureau of Economic Analysis shows that, on average, Arizonans in the state's population centers earned far less last year than those elsewhere.

The BEA puts per capita personal income nationwide -- total income divided by population -- at $40,757 for metro areas. Of areas examined by the agency, Mohave County comes the closest at $35,841.