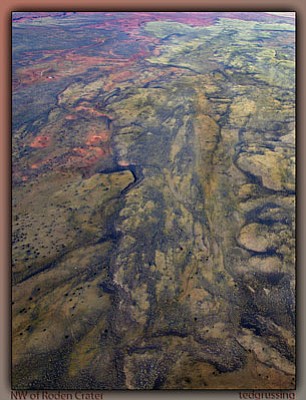 Beyond the peaks there is more beauty than you can imagine, especially when viewed from above. Saturday I flew a couple of friends on flights to the San Francisco Peaks NW of Flagstaff, thence out over the volcano fields to S-P crater, thence ESE to Roden Crater the ongoing art project of James Turrell, Grand Falls and back to Sedona. With all the rain the area has received this year the plateau was as green as I have ever seen it and with the various features of the terrain below beautiful patterns and colors were everywhere.

We ran the slope in front of the peaks from Snow Bowl past Humphreys Peak and out over the area heading N. As we passed by Humphreys peak I got the first shot of a group of hikers who had made it to the top of the peak and you can see them on the lower right side of the photo enjoying the view; we wagged our wings as we passed by climbing in more than 10kt lift. The green forest and peaks you can see beyond are in the caldera of the peaks, which a long time ago was actually a single peak more than 18,000' high. A volcanic eruption blew the top 6,000' of the mountain off and left us what we have now. Humphreys peak is still the highest point in Arizona at 12, 633' above sea level; did I say it is also very beautiful? It is.

The second shot was taken while on the way from S-P crater to Roden Crater. The colors and features of the Colorado Plateau are works of art by themselves and a sample of the beauty is in the second image. As for Roden Crater I wonder when Turrell is going to finish this project as I would like to see it. He bought a dormant crater in 1972 and this has been a work in progress since that date.

A fun and busy weekend with a lot of friends over, a little work and now some rest before the coffee pot grinds the beans and a wonderful brew will be done by 6:45A. Have a terrific Monday and hope your weekend was as good as ours.