Gloves come off in Secretary of State Debate 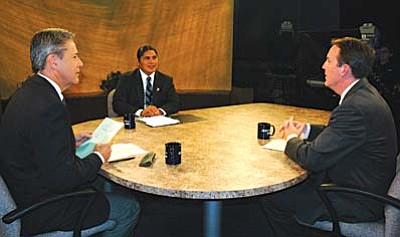 Democrat Chris Deschene said Wednesday incumbent Secretary of State Ken Bennett ignored his duties by not investigating the validity of the candidacy of several Green Party candidates. Bennett said Deschene has a "fundamental misunderstanding' of the role of secretary of state. Photo by Howard Fischer

Deschene, who hopes to unseat Bennett in November, charged during a televised debate there was more than enough reason to suspect that the contenders for various statewide and legislative office were not legitimate Green Party candidates. He said that was borne out by a subsequent ruling by a county judge who concluded several of these candidates were "recruited (by a Republican candidate) in bad faith with a purpose to confuse the voting public.'

But Bennett said it is not his role, as a partisan elected official, to decide that someone who has submitted sufficient signatures to run is not a legitimate candidate.

And Bennett pointed out that, with one exception, Judge Dean Fink said that the candidates themselves were sincere in their desire to get elected. The judge said the motives of those who recruited them are legally irrelevant, and they are entitled to run.

The dispute points up a key difference between the pair about the role of the secretary of state, who serves as the chief elections officer.

What Deschene referred to as the "Green Party scandal' stems from efforts by some Republicans to convince people who were previously uninterested in seeking office to run under that party's banner. Democrats and Green Party officials charged -- and Fink essentially agreed -- that was a sham to syphon votes away from Democratic candidates, to the benefit of their Republican foes.

"We need somebody who has the strength to say, basically, look, there is something wrong here,' Deschene said. The alternative, he said, would result in "a mockery of our election system.'

Bennett said Deschene has a "fundamental misunderstanding' of the role of secretary of state.

"The voters should decide who is going to represent them," Bennett responded. And if there are legal questions, he said those whose believe their interests have been harmed remain free to seek intervention from an impartial judge, as happened here.

The debate on KAET-TV, the Phoenix PBS affiliate, and interviews afterwards pointed up some sharp differences in experience.

More attention is being paid to that given that a governor has died, quit or been removed from office five times since 1977. The secretary of state is first in line of succession.

Deschene has been a legislator for less than two years. But he cited his experience as a Marine, an attorney and an engineer.

And he said that should be seen as a positive.

"I don't think you need to be a career politician with the experience to recognize that,' he said.

Bennett also ribbed Deschene for missing more than a third of all roll-call votes while a House member.

Deschene did not dispute the number. But he said some of that was due to the maneuvers of the Republican leadership, suspending rules that require certain notice before meetings, something Deschene said creates particular problems for someone who otherwise has to drive in from Window Rock in the far northeast corner of the state.

On a separate issue, Deschene is opposed to Proposition 111 which would rename the post of secretary of state to lieutenant governor. He said his opposition is based on other provisions that would have whoever wins each party's primary for governor and lieutenant governor run as a ticket, a provision he said can disenfranchise independent and minor party candidates.

Bennett said that, as the state elections officer, he will not take a position on the ballot measure.