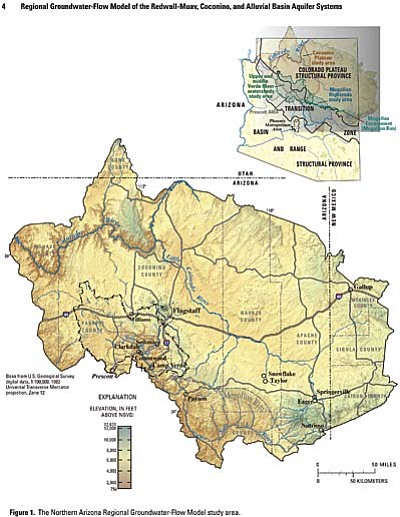 A high-tech computer model released to the public Tuesday will expand understanding of how people can affect the underground water systems they depend upon throughout rural Arizona.

Local governments, for example, can insert population growth projections into the model to analyze how growth in certain areas could affect groundwater systems as well as the rivers they feed.

"This is probably the best available tool at this time," said Stan Leake, a co-author of the report.

The U.S. Geological Survey released the Northern Arizona Regional Groundwater Flow Model to the public Tuesday by posting it online. An accompanying report explains the model in writing.

The complicated groundwater model includes the watersheds of the Verde, Salt, Colorado and Little Colorado, covering about a third of the state. Groundwater is the main source of water for the study area's 550,000 residents.

"This model can help the people of Arizona understand the adequacy of their groundwater supply at regional and smaller scales, and how aquifers, rivers and streams may be affected by possible groundwater development and climate variations," said Jim Leenhouts, associate director of the USGS in Arizona.

The Arizona Department of Water Resources said it first commissioned the USGS to conduct the study in 1999.

"Having cooperatively worked with the USGS for many years, the department was fully aware of the capability of the USGS to develop an unbiased model that would improve understanding of the groundwater system and, ultimately, management of the region's water resources," said Tom Whitmer, manager of statewide water planning for the Arizona Department of Water Resources.

The Yavapai County Water Advisory Committee was the only local entity to help financially with the project, spending roughly $400,000 to collect water information for the model.

"It was a monumental undertaking," Water Advisory Committee Coordinator John Rasmussen said of the model. "It's been a long time coming."

The water committee plans to discuss issues surrounding the model at its next monthly meeting April 20. After the committee's technical advisors work with USGS scientists on how to translate the technical information to the general public, the USGS will give a presentation to the committee at its May 18 meeting

"I think we need to take some time to evaluate what we have," Rasmussen said.

The model simulates how precipitation has moved through underground aquifers and then surfaced in rivers, streams and springs between 1910 and 2005.

While computer models of parts of the study area already existed, this new model connects several river basins to show how they interact with each other.

"Because the model is regional and able to consider interconnected aquifers, it allows us to better understand and assess how groundwater development in one area might affect flow to or from adjacent areas," said USGS Hydrologist Don Pool, the model's primary developer. For example, the report notes that precipitation in the Big Chino Sub-basin north of Big Black Mesa actually contributes to groundwater flow in the Coconino Plateau Basin and discharges into the Colorado River.

"It also includes sufficient detail to study changes in smaller areas within the region, such as the Verde Valley or the Coconino Plateau," Pool said of the report.

For example, even though the Prescott Active Management Area has more groundwater information than most other areas in the model, it still could use better information about where and how much precipitation recharges into the groundwater system, Pool said.

Are geologic faults in the Upper Verde River region barriers or conduits to groundwater flow? That's another unanswered question, Pool said. It would take a lot of well-placed wells with extensive monitoring systems to answer that one, he said.

One of the major insights Pool said he gained from creating the model was the importance of variations in groundwater basin recharge rates.