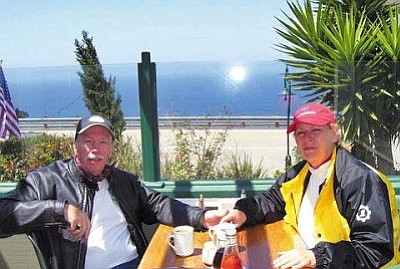 Mike was an Honored Member of Who’s Who Worldwide and included in the 1993/1994 of Who’s Who Registry of Global Business Leaders. Industries including Intel, Sharp Micro Conductors, and National Semi Conductors.

Mike had affiliations with and was a lifetime member of the Sierra Club, American legion Member, Freedom Riders, Hog Member, and a Member of the Nature Conservatory.

Mike was also an American Legion Riders lodge 25. BMW Club, Elks Member AZ Lodge 2429. Mike was a Past member of the American Society of Quality and Control, and a lifetime member of the US Navy Tin Can Sailor. He was also a Tea Party Member. He was nominated for Bus Driver of the year award in Cottonwood, AZ 2006-2007.

The one thing Mike always stressed about life was to live it to the fullest, and enjoy each day as if it were your last. Mike was always running into life with all his heart.

He was not only a wonderful loving Husband and my best friend, but a loving Father also. Mike found his way home to his Heavenly Father and the Mormon Church of LDS and was a member in good standing along with being an Elder.

A Memorial Service will be held in his honor in the weeks to come. In Lieu of flowers please send donations to the American Cancer Society for Melanoma Cancer.