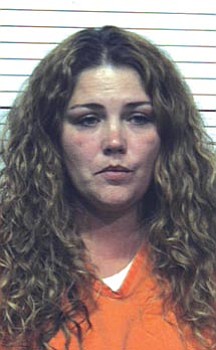 BRIDGEPORT-- Two Bridgeport teens were each charged with five counts of vehicle burglary, burglary of a business, possession of burglary tools, felony criminal damage, theft, and two counts of auto theft. One of the teens was also charged with one count of destruction of evidence.

One of the teens' mother, Rhonda Norris, 35, was charged with hindering prosecution and removing physical evidence.

April 14, a Yavapai County Sheriff's deputy was dispatched to a vandalism case on Purple Sage Trail. Norris alleged a teenage boy had vandalized her daughter's car after an argument. She reported that one of the teens had complained that her son brought a firearm into his home and his family did not want him over anymore.

He said the weapon contained live rounds and was a 9mm, silver in color, black grips and contained in a black holster. One of the family members saw the weapon in his room when he took it out of a lock box to play with it.

There had been a vehicle burglary a block away on Bridle Path Road that involved the theft of a Taurus 9mm handgun like the one the boy was playing with.

The teen denied any knowledge of the firearm, and his room was searched. Deputies found the lock box, but no gun. Deputies also spotted a unique sword in the room. They also noticed shoes in the room with a sole pattern matching a shoeprint from a recent car theft case.

On April 15, deputies confronted one of the teens with evidence of his involvement in the vehicle theft and he allegedly admitted to stealing vehicles and committing area burglaries. He also told deputies that he and his mom, Norris, had driven up to Mingus Mountain the day before speaking with deputies and dumped the silver colored handgun and other evidence, according to the report. .

Deputies then arrested Norris, and the pair showed officers where they dumped the stolen property. Deputies found two backpacks containing the stolen Taurus firearm, along with numerous additional stolen items and burglary tools. The boy was booked at the Prescott Juvenile Detention Center, and Norris was booked at the Camp Verde Detention Center on the indicated charges.

The next day, the other teen was linked to the burglaries and arrested and booked into juvenile detention.

Deputies verified the suspects had burglarized the nearby Garcia's Mexican Market on several occasions after stealing store keys from a vehicle parked nearby. The sword was later found by deputies in a nearby trashcan and confirmed to have been stolen from the business.

The two vehicle thefts included a red Nissan pick-up stolen from a home on Zalesky Road in February, and a blue Dodge Durango taken from a home on Bride Path Road, Bridgeport, earlier this month.

The investigation into additional crimes will continue. If anyone has further information, please contact YCSO or Yavapai Silent Witness at (800) 932-3232.

CAMP VERDE -- Camp Verde Fire crews were called to a wreck with injuries on Interstate 17 Thursday. A southbound car rolled near milepost 280, near the safety pullout.

There were two occupants, both of whom got out of the rolled vehicle. One had no injuries and the second was treated on the scene but not taken to the hospital.

At 9:30 the same morning, rescue crews rolled to a two-vehicle collision on Middle Verde Road. The wreck proved to be a rear-end collision. One occupant, a passenger in the trailing vehicle, was transported to Verde Valley Medical Center with non-life threatening injuries.

CAMP VERDE - April 19 at approximately 10:18 a.m., Kai Murdock, 31, was arrested by the Camp Verde Marshal's Office after being accused of stealing $1,170 in cash from a family member's residence on McCracken Lane.

He faces charges of burglary, criminal trespass, possession of stolen property, and theft per domestic violence. Murdock was booked into Yavapai County Jail.

CVMO was contacted April 20 at 8:45 a.m. with a report that a lawn mower had been taken from the property along with a small, copper, hand-made cross.