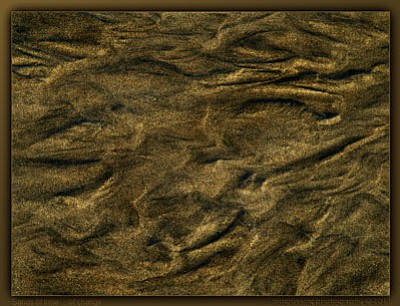 I think I got the inspiration for tonight¡¦s shot from ¡§The Fabric of the Cosmos; Space Time and the Texture of Reality¡-, by Brian Greene. It is a great read and I seemed to be able to visualize and understand the concepts quite well until I got to probability waves in Quantum mechanics, and that has slowed me down a bit. Think I am getting it, but it needs some more soaking in and wrestling with it overnight. The image is one I took on the beach in Northern California on my last trip up there a year and a half ago and it is probably not there now and may not have been when I took the shot, and it may have appeared the same way to someone else on the other side of the universe at the same time ¡K I definitely need to sleep on this one.

It was another fun day of working on photos and I even had time to get a couple of opals cut today. Corky and I had a nice walk this afternoon, Q was Q and is currently occupying the other chair in my den. Didn¡¦t get the new website uploaded today as I am still populating the galleries and am hoping for tomorrow now.

What started as simply buying a new video card for the Lenovo workstation in the living room computer has evolved into a, not sure what to call it. The motherboard in the computer did not like the new video card. Solution was simple, replace the motherboard, CPU and Ram with new and current generation devices. I sold the parts I took out to a friend and the net difference was well within reason. Next issue after installing the new motherboard, CPU and Ram is that the case was cabled specifically for the motherboard which came out. The new motherboard would not function in the old case. Call to friend and he bought the case, power supply, multi card reader and DVD R/W device. I bought a new case, power supply, DVD R/W device, and multi card reader. Out of my original Workstation which was just great, I now only have the three hard drives and the rest is a brand new computer and our little ISO 100 Club can now have a color calibrated 46¡- monitor to look at our work on ¡KYikes, but it is fun. I have refused to add up the cost of this one, but it is essentially the same as the Q Factor.

Have a great day and be wary about upgrading your computer º Q seemed to be smiling as there will now be two Q Factor computers in the house ¡K somehow I think it was predicted by probability waves.

Spring
By request
A little ...
A little landscape
I wish I knew