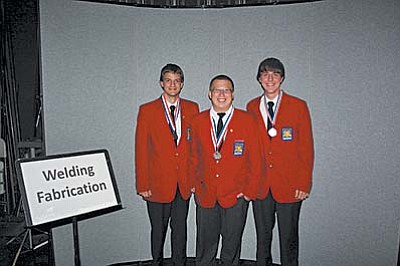 The Welding Fabrication team - made up of John Stratz, Kyle Alexander and Mason Hart - won Gold for the second year in a row. Winning the gold qualifies the team to represent Arizona at the SkillsUSA National Leadership and Skill Conference in Kansas City, Mo. June 20 - 25.

This will be the fabrication team's second trip to compete at the national level.

Sophomore Jordan Schriner, competed in welding for the first time and won a bronze medal for prepared speech. Also in his first year of competition, junior Elias Luna, in both the C.A.D. and engineering programs at Mingus, won a silver medal in the difficult category of technical drafting.