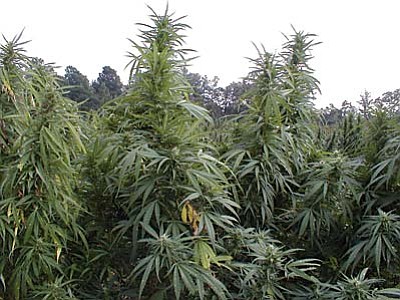 PHOENIX -- Federal attorneys asked a judge on Monday to throw out a lawsuit filed by Gov. Jan Brewer seeking a ruling about the legality of the state's medical marijuana law.

Deputy U.S. Attorney Scott Risner said there is no legal basis for the lawsuit. Risner told U.S. District Court Judge Susan Bolton in legal papers filed in her court that, absent some actual threat of prosecution under federal drug laws by his office, the question is purely academic and therefore not a proper subject for litigation.

But state Attorney General Tom Horne, who filed the lawsuit in May on the governor's behalf, said Risner is telling only part of the story.

The fight surrounds the decision by Arizona voters last year to set up a system allowing those with a doctor's recommendation and a state-issued ID card to purchase marijuana from state-regulated dispensaries.

Since that time, several federal prosecutors, including Dennis Burke, the U.S. Attorney for Arizona, warned that possession and sale of the drug remains illegal under federal law. Brewer then directed Horne to ask a federal court whether Arizona could implement its program anyway.

In the interim, the state health department, at Brewer's direction, decided not to license any dispensaries, though they have continued to certify patients as medical marijuana users.

Risner said the problem with Horne's lawsuit is that no state employee involved in issuing licenses -- those that Brewer said she was most concerned about -- is facing prosecution.

He pointed out that federal prosecutors, in their letters to state officials in Arizona and elsewhere, essentially said that medical marijuana users have nothing to fear. It's what those letters did not say, Horne said, which amounts to a threat.

"And they said they were going to vigorously prosecute anyone who is involved in the distribution of marijuana,' Horne continued, a category that could include state workers. "What unbelievable hypocrites!'

Horne also brushed aside Risner's argument that there can be no risk of prosecution to state health workers since they are neither accepting nor processing applications from those who want to operate dispensaries.

"We asked for the court decision and we said we'll hold it up until there is a court decision,' Horne complained. He called it "sophistry' for the Department of Justice to now argue that the state, by putting the license-issuing process on hold, is now not entitled to a ruling on the very issue that is holding up the process in the first place.

Risner did not return a call to his office seeking comment.

It's not just the Department of Justice trying to have the governor's lawsuit dismissed. Would-be dispensary operators and American Civil Liberties Union are making similar arguments in their own legal filings.

Bolton has not set a date for a hearing.