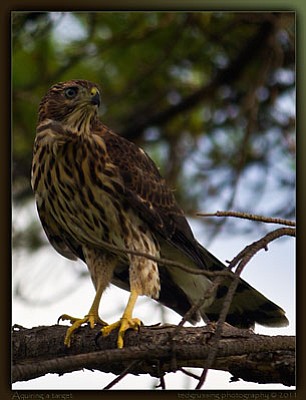 Today was excellent and the creatures seemed to be taunting me. Early afternoon I rode the motor scooter down to the post office to mail some lenses to a friend and as I came up to a stop sign a young bobcat sauntered across the street in front of me and began playing some kind of game with a rabbit on the sixth tee box (not serious about eating it). He let me get some shots with my Droid X, but with all the good stuff at home I didn't stand a chance of getting a good shot of him. After I got home, Corky and I spent some time on the deck with Q and three Coopers Hawks began playing with me. About twenty feet out they would make a whistling sound (designed to flush out prey) and then fly about ten feet over my head ... with no time to get a camera up before they were gone it seemed that they were taunting me just as the bobcat was with the rabbit a little earlier. Finally I followed them into some nearby trees and got some nice shots of them. Even sweeter because this is the first day they have spent any real time in our area this year.

The first shot shows the Coopers Hawk searching for prey in a nearby tree, the second shot is of the same hawk locked onto target and pursuing prey that had just flown by. Coopers Hawks prey on birds and make their kill in flight; check those talons out! Their favorite birds are Doves, and I think that is because the Doves fly pretty much straight line and are easier to hit than birds that have erratic flight paths. The third shot is of a neat sunset that I got on the deck while barbequing steaks on the grill. A friend called whilst I was out there to tell me about it so this shot is for him, The rainbow in the image was of colors I have not seen before ...sweet!

Another wonderful day underway. Kona beans in the hopper and looking forward to my wakeup call when they begin to grind.

Be well, be joyful