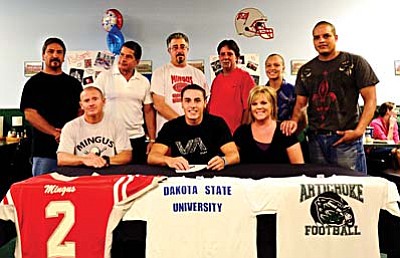 <b>Robert Ortiz</b> signs a letter of intent to play football for the Trojans of Dakota State University at Vinnie’s Pizzeria in Cottonwood Thursday evening. VVN/Sean Morris

COTTONWOOD--It's amazing how fast life can change. A few weeks ago, '09 Mingus graduate Robert Ortiz was perfectly content playing receiver for the Scottsdale Community College Artichokes, but opportunity came knocking and he decided to go for it.

This football season, Ortiz will have to deal with cold weather in the Dakotas because he's decided to accept a full ride to study physical education at Dakota State University in Madison, SD.

It's a small town, but that's one of the things that attracted Ortiz; it reminded him of home.

When Ortiz played for the Marauders he had many different roles, and he was an all-around great player on both sides of the ball, but at Scottsdale he became more specialized as a receiver and returner.

He refined his skills so much that when he was asked to attend a workout at DSU, he had what it took to impress the coaches enough for them to offer an education he couldn't refuse.

But the decision wasn't all that easy.

"My coaches have been my family for the last two years in Scottsdale. They gave me a chance when nobody else would, coming out of high school. And the players have been my brothers," said Ortiz. "That was the biggest thing I was bummed about when I decided to leave, because I'm really going to miss my coaches and teammates at Scottsdale."

After Ortiz was offered a full ride to DSU, he met with his coaches at Scottsdale to let them know he was conflicted. They put things into perspective when they told him to take the scholarship. Earning an opportunity at a university is why athletes decide to go to junior college in the first place--even though he was happy at Scottsdale, it became evident to Ortiz, he needed to leave.

"It was just a better situation for me and my education," said Ortiz.

When people ask Ortiz what he wants to do with a physical education degree, there's a man he can point to that he'd like to emulate.

"Picture coach Young's job. That's my dream job," said Ortiz. "Our relationship was one that I'll always remember. Everything he ever taught me translates into now, and me living on my own. One of his things was, we don't have the top athletes in Cottonwood, but if you work hard, we can be one of the top teams in the state. I look back now, and I've worked so hard the last two years of my life in Scottsdale, and I see that hard work pays off. I'm proof of it--I just got a full ride to play football at a university."

Ortiz was very impressed with the campus at DSU.

"Everything was up to date and modern, I really liked the campus, and they're a great technology school," said Ortiz.

His play on the field isn't the only thing that earned his scholarship; he also did very well academically at Scottsdale.

"It's kind of surprising because when I graduated from Mingus I had a 2.7 GPA, but at Scottsdale after last semester my GPA was 3.3, so I did alright," said Ortiz. "My grades helped me get a full ride too."

Thursday evening Ortiz had a signing party at Vinnie's Pizzeria in Cottonwood.

"Candi and Vinnie are great people. I've known them since I was in seventh grade when they first moved here. They've always been involved, and Candi is pretty much the Mingus mom," said Ortiz. "I would rather do it at Vinnie's than any place. They're my friends and they've always been supportive. There's enough room there for all my friends and family. The food is amazing too--I eat at their place every time I'm in town."

Ortiz is about to spread his wings and move out of state, but you can bet he values growing up in the Verde Valley. He's grounded, and he's just as proud to be from Cottonwood as his friends and family are proud of his accomplishments.

One big change Ortiz will have to deal with this season--his mom won't be on the sidelines. For nearly every game since Ortiz was six; from High Desert Youth Football, to CMS, to Mingus, to Scottsdale; Toni Glenn has only missed two games. She's his No. 1 fan.

Everything happened pretty fast for Ortiz, but he's grateful for the opportunity to play and learn at DSU.