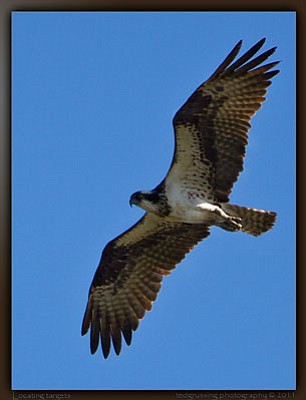 ...was a very good one and now I'm well into getting Monday off to a good start. Saturday Corky and I went to birthday party for "Lucy" that a friend of ours has every year and it was fun; afterwards it was down to the ponds to try out a new lens combination and I got lucky with an Osprey cruising in for his late afternoon meal about the time I exited the van. I never got all that close to him, but the new lens combination brought him in quite well. He made one dive and missed, but the second time he nailed his target and was off for a very tasty meal. The first shot tonight was of him cruising about a hundred feet above the ponds looking for a fish near the surface. The second shot shows him in the dive for the water. Love to watch predators in action as they have a little more drama in their daily lives than we do ... not much to watch as people select a steak from the meat market. For this Osprey and all other creatures in nature their days are consumed in finding food to sustain them; it is hunt and succeed or perish. As a friend of mine states the phrase "free as a bird" does not address reality.

And more about reality is the creature who permits us to share a home with him ... Q is back and his true personality is easily discernible from this portrait of him. Pardon the little flecks of dust in his coat, he had just finished rolling in his dust basin. Sunday we made a Wal-Mart run late in the afternoon and I got a lot of work done before that. A friend brought over a couple of iris bulbs for me to plant and she assured me that other than putting them in a hole in the ground I would not have to do anything (my kind of gardening) to them. A bit of history goes with them as they are from the flower beds that Sedona Schnebly tended. Kind of neat and I will make every effort to make them grow and bloom and then shoot them and create a 30 x 40 or larger image from them. First things first, I have to plant them today.

Have a wonderful day, be happy and share your bliss.

At the ponds
Sunday traditions
Cruising
A touch ...
a thousand words