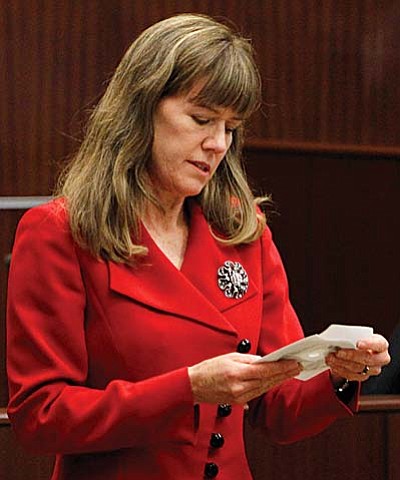 Polk, who said she wanted to make a clear record of what transpired in the four-month trial, identified and gave her case against 31 specific complaints of prosecutorial misconduct in the defense motion for a new trial.

"Of those 31, I concede three errors," she said, adding that the errors did not rise to the level of the prosecutorial misconduct Ray's attorney's have accused her of, and that even if they did, misconduct alone did not automatically warrant a new trial.

A jury found Ray, 53, a former best-selling self-help author, guilty on June 22 of three counts of negligent homicide in the October 2009 deaths of Kirby Brown, James Shore and Liz Neuman. All three perished after attending a Ray-led sweat lodge ceremony at the Angel Valley Spiritual Retreat Center near Sedona.

The three errors Polk admitted to were the failure to disclose a report from environmental consultant Rick Haddow, an omission that nearly resulted in a mistrial; a comment she made in her closing argument about the significance of an audio clip she played; and the playing of an audio clip during her closing argument of the aggravation phase that was not admitted into evidence.

"The record in this case is very strong that the court responded to these incidents in a timely fashion," Polk said. Darrow issued multiple supplemental instructions to the jury during the trial, cautioning them not to consider the lawyers' words as evidence, and he gave the defense an opportunity to react to the Haddow incident by calling the consultant as a witness, which they ultimately declined to do.

Polk argued that errors by the prosecution must be intentional and clearly prejudicial in order to warrant a new trial. In the matter of the alleged "secret meeting" that prosecutors and medical examiners held in December 2009, which led to court-ordered monetary sanctions against her office, Polk said the fact that she and her team offered a good-faith argument in defense of their refusal to turn over the notes from the meeting was enough to clear them of any alleged misconduct.

And as to the matter of playing the unadmitted audio clip during the aggravation phase, Polk said it didn't matter because the jury had already settled on Ray's guilt and they did not find for the aggravating factor the clip pertained to - that Ray had caused the three deaths while seeking monetary gain.

Defense attorney Tom Kelly, who kept his argument brief and deferred to Darrow's experience and judgment in deciding the motion, pointed out that the defense was kept constantly on edge due to the 17 supplemental disclosures the state filed during the trial itself.

"You stated that this is not going to be a trial by surprise," he told Darrow, and reminded the judge of what he said after Polk played the unadmitted clip.

"You cautioned the state by saying, 'If it's admitted at trial, it's admitted. If it's not admitted, then it's right into mistrial.'"

Darrow took the motion under advisement and has yet to schedule a sentencing date for Ray, who remains free on $525,000 bond.

Should Darrow grant the motion for a new trial, it will come at some expense. Hard costs from the initial trial exceeded $200,000, not including court time and the salaried time of the prosecution team headed by Polk and Deputy Yavapai County Attorney Bill Hughes.

Travel and overtime expense for YCSO Deputy Ross Diskin amounted to $62,527. Diskin was the lead investigator in the case, beginning his involvement the day after the incident and continuing through the four months of trial.

The Yavapai County Attorney's Office spent $54,212 on witness travel and for expert witnesses. That total includes $19,600 to Dr. Matthew Dickson of Yuma, whose testimony vehemently debunked the defense contention that organophosphate poisoning was a possible cause of the three victims' deaths.

Judge Darrow's courtroom would have been open for business, at the cost of $1,478 per day, with or without the lengthy trial. With that in mind, the 71 days the trial has consumed cost $104,938.