Night of comedy on tap Saturday at Relics 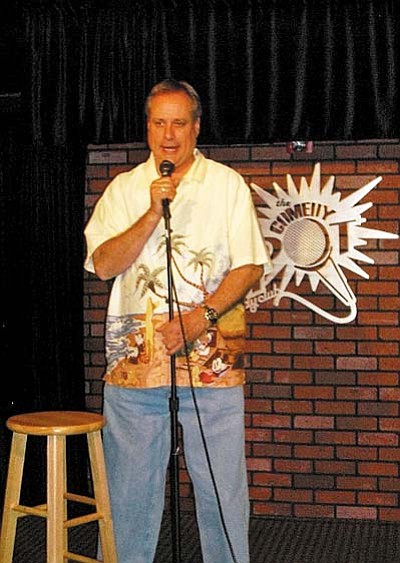 Blair's press kit reads like one of his comedy routines. It says he was born early one humid St Louis summer day in 1959. By nightfall he was dead, shot in the face with a nickel-plated 45. A mentally unstable priest mistook young John for the Anti-Christ, who was, actually in the next room. Too bad, because his destiny was to be one of the greatest comedian's of all time.

Had John been allowed to grow up, he would have gone to Catholic school. Noticing that John was special, Mother Superior gave him the lead in the school play as the head gingerbread man. Thinking this would humiliate young John into submission, unfortunately the plan didn't work ... John brought down the house. Now armed with the knowledge that he had the power to entertain, he divorced his parents and moved to Sedona.

He got a job as a pearl diver in a greasy spoon owned by the talented movie star Jane Russell. Working under the alias of Mañual Laboúr the notorious Peruvian dishwasher, John found comfort, Southern Comfort! Let's get this party started.

At the urging of Miss Russell, John enrolled in the Southwest Theater Company were he landed the starring role as Mortimer Brewster in the play Arsenic and Old Lace. It was a smash hit, things were looking up for young John, when the french-fry guy at the greasy spoon died and John was given the promotion, and after a string of successful theater productions John made an impression on the owner of the local Radio station Big Joe Tayback, brother of Vic Tayback star of stage and screen but that's another story, he left the restaurant business to became a disk jockey. You're on the air with Jean Pierrè the famous French disk jockey (another grandiose alias).

However as so many child stars do when the come of age John became overwhelmed with  fame and began his decent into the dark world of drugs, and alcohol. Drinking a fifth of peppermint schnapps a day, and a habit of $25 a week for Mexican rag weed, friends and family watched as he spiraled out of control.

Finally hitting his bottom, John gave up drugs and alcohol to begin wandering the earth like Kung Fu. His journey leads him to Scottsdale; his bare feet blistering from the summer heat John passed out and had a dream. Stand Up, Stand Up, Stand Up. The phrase kept repeating over and over. It has been said when the student is ready a teacher will appear. John awoke and began his tutelage in stand up comedy. He's studied under Miss Dianne Kincaid. Tony Vicich and "The Greg Wilson."

And the rest is history in the making, John has performed stand-up at The Hidden House, The Comedy Spot, The World famous Tempe Improv, and The World Series of Comedy, and Big Al's Comedy Club in Las Vegas.

Also taking the stage Saturday will be Paul Diedrich. He has been performing stand up for two years, yet already he has headlined shows around the state such as The Black Box Theater in Casa Grande, Dillon's and Manuel's in Phoenix, and has featured at such comedy clubs as The Comedy Spot. Paul has upcoming performances at Flappers in Los Angeles and Stand Up Live in Phoenix.

The show also includes Ronnete Daniel, an up-and-coming comedian. Ronnete is trying to make the world happy again one laugh at a time. She has opened at "The Comedy Spot" in Scottsdale and is fast becoming a local favorite.  Ronnete is destined for great things because she paid a psychic $20 to tell her so.

Also performing will be Brian Kohatsu, Born and raised in Glendale, one would think

that Brian would have a dry sense of humor ... but seriously folks, it's Arizona, he's just trying not to be deported. Using physicality, impression, music and improvisation, Brian is one of the hottest comedians on the rise in the Southwest. Having spent 20 years as an award-winning director, Brian stepped away from the camera to begin his career in comedy.  He quickly found success in radio as the host of his own show, The BS Factor with Brian and Stephanie on the All Comedy Radio network. Brian gained national recognition when many of his sketches were featured on National Lampoon Radio on XM/Sirius.

Brian's impressions, knowledge of pop culture and unique delivery style have made him an audience favorite. It doesn't matter what he's talking about, Brian puts a smile on everybody's face!

Eleanor Stone is a native to Arizona; she has been performing stand-up comedy for several years. Her comedy is definitely eccentric and observational as well as having an electric personality her sense of humor is defiantly contagious.

The comedic slate also features Guillermo Robles. Originally from Guatemala, Guillermo performs regularly at the world famous Tempe Improv. His gallows humor comes from spending a lot of time in jail. No really! In addition to stand up comedy Guillermo is a translator for the Maricopa court system.

There will be a $10 cover at the door and a two item minimum. Drinks and appetizers will be served during the show. Call Relics at (928)-282-1593 to reserve your seats.