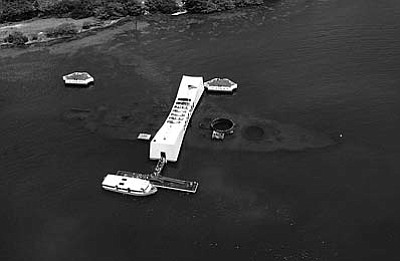 More than 1,000 crewmen were entombed on the USS Arizona, now a national memorial. Artifacts from the battleship can be found at the Arizona state capitol.

We have had many wars, many battles, many lives lost in uniform, but there remains something about Pearl Harbor that is still gut-wrenching after all these decades.

Seventy years ago today, the U.S. Pacific Fleet was devastated by Japan, and a new era dawned in America. The witnesses to the attack are fewer every year. As our veterans pass away, it’s even getting hard to find those who have a sound memory of hearing about Pearl Harbor that day and understanding what it meant.

For most of us, the attack is a featured box in our old history books or a topic easily researched on the Internet. But what happened on Dec. 7, 1941, in Hawaii has never come across as a dry account of facts and figures. After 70 years, the story is still human and horrific.

A strike out of the blue on a beautiful morning - it is a terror that still sparks our collective imagination and finds comparison to only one other event in American history. Thoughts of Pearl do not dwell on international relations or roots of war or political missteps. Thoughts of Pearl settle on young guys, many of them just kids, in an atrociously helpless situation. It is the stuff of human nightmares.

Just after 8 a.m. that Sunday a bomb struck the USS Arizona, causing an explosion that sank the battleship and killed 1,177 crewmen. Little more than 200 survived. The death toll accounted for nearly half of those killed in the entire attack on the fleet.

Here in the state of Arizona, being the namesake of the doomed ship, we feel a particular connection. It is not as if the Arizona was actually from Arizona or peopled by Arizonans, but she is still ours. You can go down to the State Capitol Museum to find artifacts from the ship on display or find a mast and anchor in Wesley Bolin Memorial Plaza next door.

The leaking underwater tomb that is now the USS Arizona remains a national symbol of what happened 70 years ago today. It is a reminder of how entry into global combat changed everything in the United States. It is a warning of the brutality of war.

Most of all, Pearl Harbor continues to tell us a very human story of one horrifying day, even after 70 years.