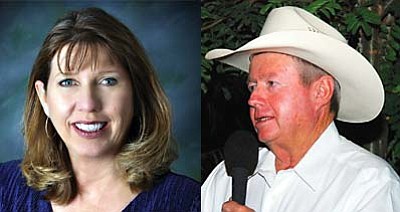 PRESCOTT - Ranchers who own a combined 430,000 acres in Yavapai County have filed an Arizona Tax Court suit against Yavapai County Assessor Pam Pearsall, accusing her of illegally jacking up the value of their grazing land.

It's the largest number of acres involved in any property tax lawsuit he's ever seen, said the ranchers' attorney Paul Mooney of Mesa.

The list of about three dozen plaintiffs reads like a who's who of Yavapai County ranching families, including Fain, Groseta, Hays, Maughn, Kieckhefer, James, Teskey, McCraine and Denton. Ranches include Yavapai, Orme and Inscription Canyon.

The lawsuit says the plaintiffs own or lease 2.5 million acres of public and private ag land in Yavapai County, or nearly half of all the acreage in the county.

While it is not a class action lawsuit, it is likely to have the effect of a class action suit if the plaintiffs win because the assessor must value all similar properties in the same fashion, Mooney said.

The Arizona Cattle Growers' Association joined in the suit.

"We don't very often do that," said Bas Aja, executive VP of the Arizona Cattle Feeder's Association under the Cattle Growers' Association. "It's a significant issue."

Arizona Cattle Growers' Association President Andy Groseta, a Verde Valley rancher, is a plaintiff in the suit. He and other local ranchers declined to discuss the issue since it's under litigation.

The suit also names Yavapai County and the Arizona Department of Revenue.

The Assessor's Office in February raised the full cash value of grazing land from $7.56 per acre in the 2011 taxable year to $25 per acre in 2012. State law requires assessors to base grazing land value on actual income.

The quadrupled value would increase the combined value of the 429,310 acres of grazing land from $3.2 million to $10.7 million.

"Values are not excessive at $25 an acre," Pearsall said in a short email Monday evening while she was out of town, before seeing the lawsuit. "These values had not been updated for decades in Yavapai County."

The ag property designation makes a huge difference in property values, and therefore property taxes. The average value of vacant acreage is $32,867 per acre in Yavapai County, the Yavapai County Assessor's Office stated earlier this year.

Pearsall said because most property taxes are based on limited property values instead of full cash values, the ranchers' taxes will increase over a period of years. The Assessor's Office also plans to conduct its own study of ag values, McGovern said.

The lawsuit seeks property tax refunds with interest, along with attorneys' fees. Local governments won't set tax rates based on these values until August 2012, so the landowners haven't paid any higher taxes yet.

Pearsall based her value on an Arizona Department of Revenue analysis of only 58,000 acres of grazing land rentals, the lawsuit said.

"It could be devastating (to the Yavapai County ranching industry when someone is using a flawed study to increase property values 400 percent," Aja said.

"We were given that information by the Arizona Department of Revenue for that purpose and we used it in good faith," Chief Deputy Assessor Ron Gibbs said. "We just want to have values that are fair and correct."

Citing rancher complaints, the Arizona Department of Revenue sent a memo to county assessors in October saying its analysis doesn't fulfill all the requirements of the law.

And the Cattle Growers Association later commissioned a more comprehensive study of the average value of grazing land and concluded it was only $3.54/acre, the lawsuit states. That study looked at 650,000 private grazing acres and more than four million public acres, the association stated.

The county's Board of Equalization hearing officer has upheld appeals of Pearsall's value increase.

This isn't the first clash between some rural Yavapai County property owners and Pearsall.

"The assessor has made repeated statements about agricultural property taxation that indicate a clear bias against the statutory methods prescribed to value such property," the lawsuit alleges.

Skull Valley rancher Barry Denton originally asked Pierce for help. While Denton is a plaintiff in the current lawsuit, Pierce is not.