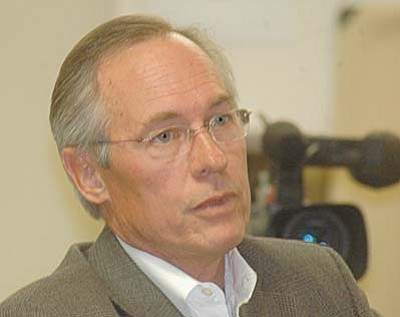 CAMP VERDE - It has been 37 years since Salt River Project first petitioned the State of Arizona to settle water rights on the Verde River.

The case grew to include all water rights in the Gila and Little Colorado River watersheds and has moved at a pace barely discernable to the outside observer,

Much of what the court's worked has concentrating on settling legal questions that need resolution before water rights can be sorted out. And what work has been made towards settling individual water rights has taken place in the San Pedro River watershed in Southern Arizona.

But the slow pace of the court case has not stopped, and in fact has been an incentive for, resolving some water rights along the Verde.

About four years ago, the Verde Ditch initiated conversations with Salt River Project to begin sorting out what differences might exist between what SRP shows to be historically irrigated acres and what lands within the ditch company's service are actually being irrigated.

The Verde Ditch is one of the oldest, and without a doubt the largest in the valley. Begun in the late 1860's and extended by a group of farmers in 1871, the Verde Ditch today snakes along the north side of the river for 17 miles, watering about 1,400 acres and serving approximately 700 shareholders.

However, the size of the ditch and the fact that many acres were added over the years has made sorting out water rights, complicated.

Three years ago the Eureka Ditch also began settlement talks with SRP. Built in the 1890's, seven miles long and servicing just 375 acres, the Eureka has proven to be less complicated.

To date the irrigation company's board and SRP have worked to identify historically irrigated lands.

"We aren't all that far off. Maybe a couple dozen acres or so that differ with what SRP shows to be historic," said spokesperson John McReynolds.

Although discussions are confidential, McReynolds says that they are at a point now where they have turned to moving water rights so that all the lands within the ditch company's service are that are currently being irrigated have a water right attached to the property.

"'You would think it would be simple. But there are a lot of legal issues that have to be addressed to make everyone happy," says McReynolds.

Dave Roberts, manager of SRP's Water Resources Management Division, says the utility is currently exploring those legal issues so that entities, such as an irrigation company, can settle their rights and not have to wait for the statewide case.

"SRP and some of the other interests in the state, including mining companies and rural water users who are tired of paying their lawyers all this time to represent them, have collectively petitioned the court to create a procedural order that would allow one or more interested parties to resolve their water rights by negotiation," says Roberts.

Under the current court rules, only Indian tribes have the ability to settle their water rights, independent of the statewide case.

"If the court can establish a procedure then irrigation companies such as the Eureka, who have negotiated an agreement with downstream water rights holders could move to the front of the line to get their issues resolved.

Roberts says a petition went to the court earlier this year. Briefs were submitted. Differences were identified. And the judge has asked the parties to get together and see if they can work out those differences.

"There are some concerns about setting precedent and other issues, so there will be more briefs filed, which will take place over the next few months. But we are optimistic that we can come up with some kind of process. We just have to wait and see," say Roberts.