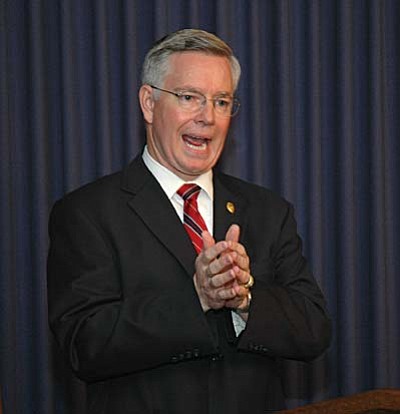 Maricopa County Attorney Bill Montgomery explains Wednesday why he intends to ask a federal judge to rule that Arizona’s Medical Marijuana Act is inconsistent with federal law and should not be allowed to take effect. (Capitol Media Services photo by Howard Fischer)

Press aide Matthew Benson said his boss is now taking the position that federal law preempts a provision in last year's initiative which requires the state to issue permits for about 125 dispensaries where medical marijuana users can legally purchase the drug. She wants U.S. District Court Judge Susan Bolton to rule that Arizona cannot process the applications from would-be dispensary owners.

The move comes two days after Bolton told attorneys for the state she would throw out Brewer's original lawsuit which simply asked the judge to decide if state employees can be prosecuted under the federal Controlled Substances Act for processing permits. Bolton said the state has to pick a side: Either federal law trumps last year's initiative, or the state can implement its law despite federal statutes.

Benson said Brewer has chosen the former position, even though that's contrary to what voters mandated.

"She does support the will of the voters,' Benson said.

"But she also she also has to look out for the well-being of her state employees,' he continued. "No state employee should be put in a position where they could face federal prosecution simply for doing their jobs.'

"I also think it's somewhat ironic that a state government that seems to continuously question federal preemption, whether it's health care or immigration, now runs behind that shield in an effort to thwart the will of the voters.

Brewer is one of several governors challenging the federal health care law. And she is taking the position at the U.S. Supreme Court that Arizona can have its own immigration laws despite claims by the Obama administration these are preempted by federal statutes.

But Benson said there is no contradiction.

The voter-approved law allows those with a doctor's recommendation to get a state ID card allowing them to obtain and possess up to 2 1/2 ounces of marijuana every two weeks.

Brewer, who opposed Proposition 204, is not asking Bolton to invalidate that part of the law. Benson said that is not a high priority. So far the state has issued more than 16,000 such cards.

The initiative also directed the health department to license about 125 dispensaries where medical marijuana users could legally purchase the drug.

State Health Director Will Humble earlier this year wrote a letter to Dennis Burke, who at the time was the U.S. Attorney for Arizona, specifically asking whether his employees might face prosecution because they were facilitating the sale of marijuana. Burke did not directly answer that question but did say that, in general, he cannot offer immunity to anyone for violating federal drug laws.

Brewer responded by directing Humble to not even accept applications from those who want to operate one of the non-profit dispensaries the law envisions. And she had Attorney General Tom Horne to file suit, asking Bolton for clarification.

But Bolton on Monday said she cannot legally do that until the state decides which side it is on, leading to Wednesday's decision.

The refusal of Brewer to license dispensaries has not denied medical marijuana users access to the drug.

One provision in the voter-approved law says cardholders who live at least 25 miles from a state-licensed dispensary are entitled to grow their own marijuana. Since there are no dispensaries, that now means everyone.

Yuhas said the whole federal lawsuit is a waste of time and taxpayer money.

He said it's uncontroverted that Arizona's Medical Marijuana Act, just like similar laws in 16 other states, is in conflict with the Controlled Substances Act. But he also said the danger of anyone being pursued by federal officials is virtually nil, citing testimony Attorney General Eric Holder gave last week to the U.S. House Judiciary Committee.

Brewer's new legal position does not guarantee that Bolton now will issue a ruling.

At Monday's hearing, Ezekiel Edwards, an attorney for the American Civil Liberties Union, urged the judge to dismiss the case, even if the governor did choose a side. He said the state has no legal right to go into federal court and ask a judge to essentially void a state law.

Brewer's move also comes just hours after Maricopa County Attorney Bill Montgomery announced he would intercede to take a position even if Brewer would not.

At a Wednesday morning press conference, Montgomery said he believes federal law overrules the state statute. And he brushed aside questions of whether states -- and their voters -- have inherent rights to decide whether their residents can grow, sell and consume marijuana.

He also rejected a question of whether it's an invalid comparison to compare slavery, which takes away an individual's rights, with the Arizona Medical Marijuana Act which grants new rights to residents who have a doctor's recommendation to use the drug. He said that, given all the criminal activity surrounding marijuana, there is a need for a single, consistent national policy.